The ArtStation Community Challenges are designed to be a fun and exciting learning experience and the Keyframe portion is all about storytelling.

According to the Challenge brief for our most recent Challenge (Ancient Civilizations), challengers needed to create four keyframes which show key narrative beats in their story that fit within the theme of Ancient Civilizations: Lost & Found. It’s wasn’t enough to create anatomically correct characters, lush jungles, or elaborate temples – participants had to tell a compelling story that draws the judges into the time, the people and the drama of the civilization.

Participants blew judges away by the quality of work they were able to complete in just 4 weeks. Have you seen the incredible results yet?

We interviewed the Ancient Civilizations Challenge winners Joakim Ericsson, Rebecca Oborn and Pablo Dominguez  on their progress and learnings from the challenge so that you can gain from their experience!

How did they do it? What was their strategy? Read on to find out directly from the winners what they did to win! 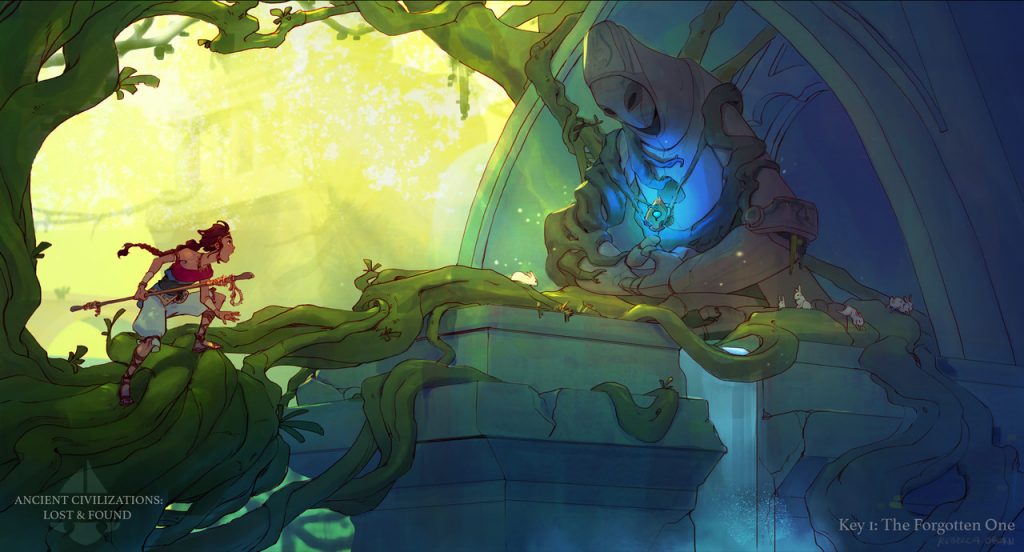 How did you choose and plan which keyframes you would be presenting?

Joakim: Most of it was my gut feeling, but I also tried to analyze it more logically just in case my intuition was wrong. I thought about the story and tried to figure out which scenes would be needed to convey the information I thought was crucial for the viewer. Important scenes, interesting environments, and points where the story would take a drastic change. I needed to keep moments that couldn’t be dropped, scenes which had the characters acting in environments that needed to be shown.

Rebecca: I actually changed my original idea halfway through the contest. I had found the previous idea wasn’t reading very well and so I decided that I needed to go back to the drawing board. I had planned out about twenty different scenarios before settling on the one that I ended up submitting to the challenge.

Pablo: I have always liked Mesopotamian culture so when I read the theme of the challenge, the ideas came alone so I started sketching all the frames and taking references. 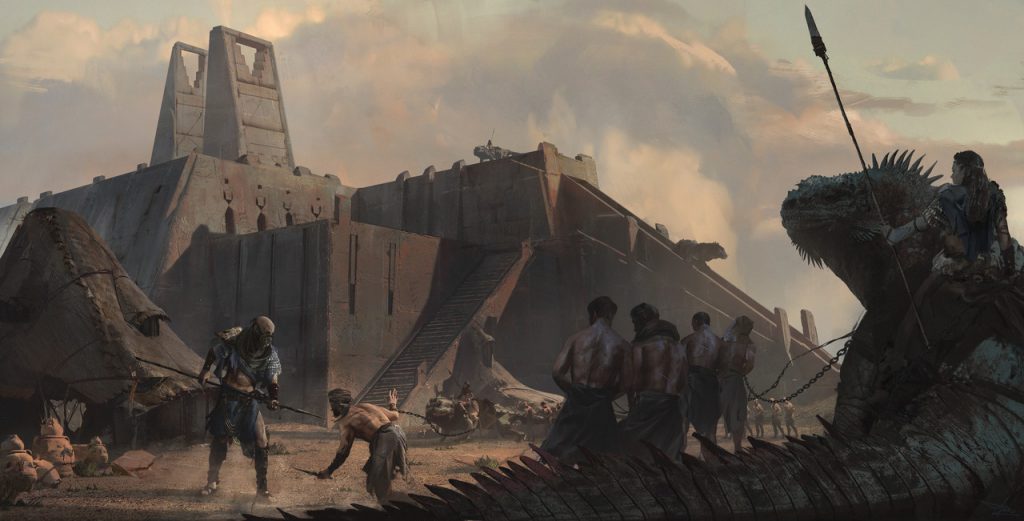 What story were you trying to tell?

Joakim: Shackleton mixed with the classical hollow earth thing, used in anything from Jules Verne, to Kong. I was also very inspired by Lovecraft’s “At The Mountains of Madness”, which also ties into “The Thing” etc. A hobby of mine is alternative history and conspiracy theories and there are many stories about Antarctica. Aliens, ruins of ancient civilizations etc. Antarctica has it all.

Rebecca: It’s about a girl who discovers a relic from a forgotten civilization. She takes the relic and a large golem-like beast awakens before her, following the relic holder back to her town. Relic hunters attack her town, seizing villagers when they fail to find the relic. Now the girl and her new friend must journey into enemy territory to rescue the kidnapped.

Pablo: I tried to create a story of a powerful empire against slaves, with fantasy beasts, Big lizards for the Empire who use it to control the slaves, and the slaves and rebels use the power of the Big Birds to reclaim their freedom. 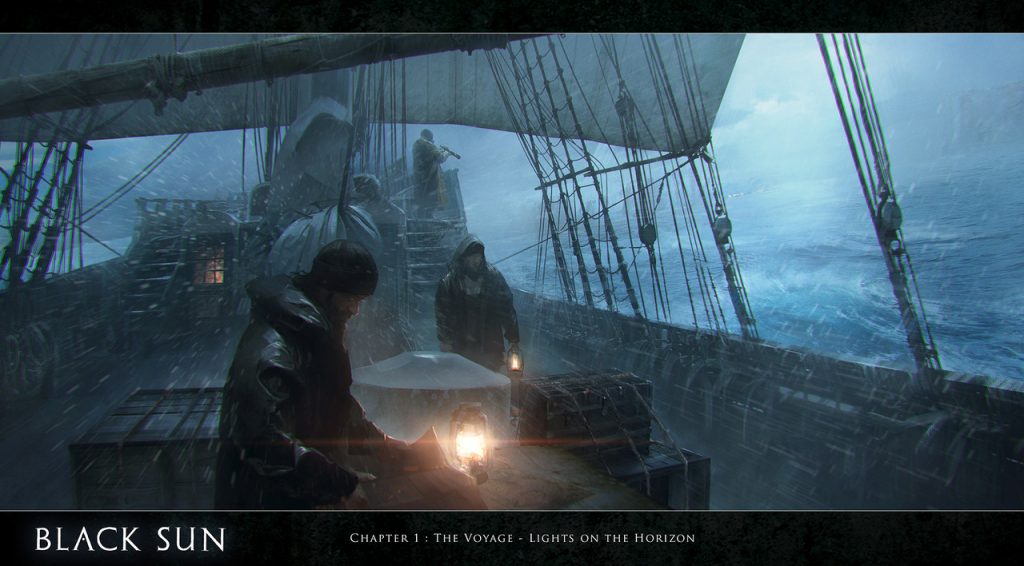 Joakim: Fun mostly, but also to see if I could present the story in a compelling way. I have an idea for a single player adventure that pretty much is what my submission shows.

Rebecca: Mostly for fun; to challenge myself and improve the way I design and display a story.

Pablo: To challenge myself to create art within a theme and in the most professional way. With my day job, I only had a few hours per day to work on the challenge. 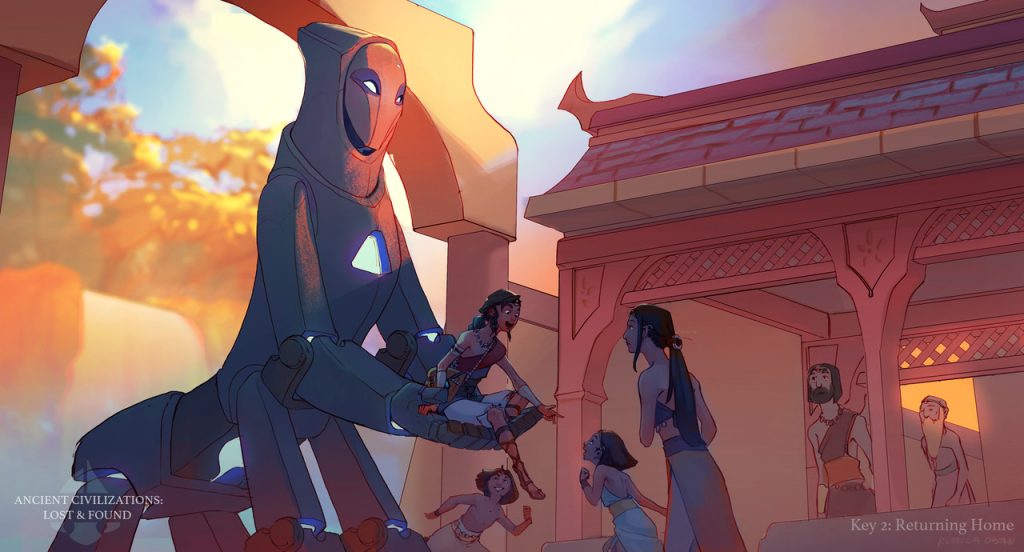 Joakim: Everything for the story, and make it readable in just a few images. I had ideas for other images as well, but realized that the four I submitted where the only choices. After some initial sketching, the task was quite clear. I also asked friends and colleagues for feedback along the way.
Rebecca: I spent a lot of time creating the overall story and planning how best to present it. From there I decided on how the world will look and feel until finally working up each image as a finished piece.
Pablo: For every piece in this challenge, I used the same workflow. First taking the first day sketches and refining them, but always with simple shapes and colors. Then the 3D base, Photobashing and painting with the sketch always present and using the historical references. 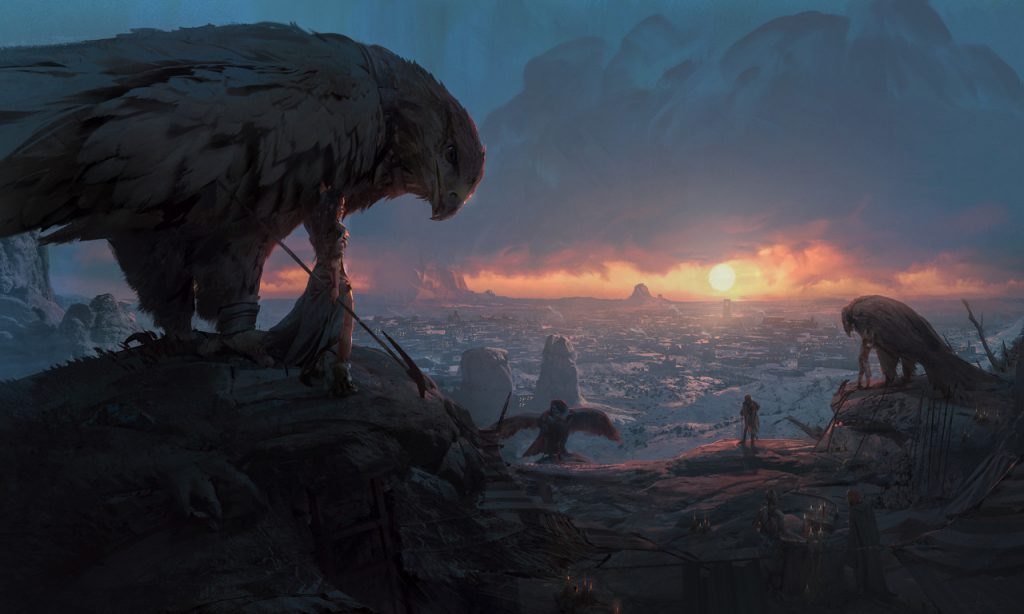 Joakim: Pablo Dominguez had very epic stuff and Rebecca Oborn had beautifully drawn work. Ryan Richmond had very vibrant images. Michael Oberschneider had a story that was my favorite. Dofresh had a series that felt very clear with the characters and the events. I liked many more, but those where the ones I studied the most.

Rebecca:  There were quite a few people I was watching during this challenge that ended up producing some fantastic work. I especially liked Lu Fio‘s submission, it has an energetic, unique and fun style that I found very appealing.

Pablo: I really like the Artur Sadlos art so I was excited about how his imagination will work for this challenge and the result was really amazing. I also discovered Ryan Richmond and Joakim Ericsson’s works are really cool too. 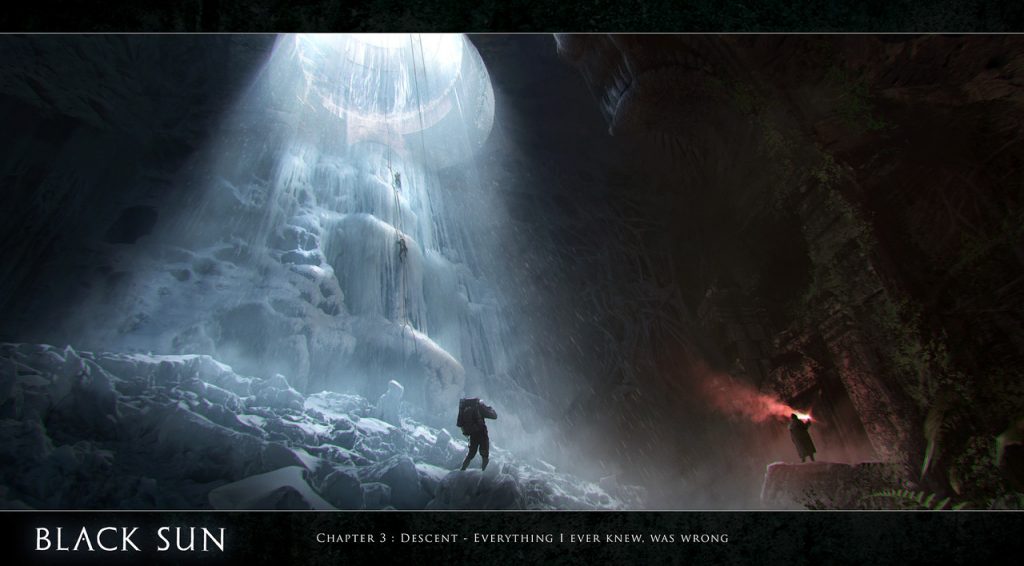 Joakim: Knowing when to stop. As always, you feel like you could have done better, but when you start walking in circles it’s time to call it done. I could have pushed it more after some though and clear feedback, but I had to finish it. Also, making an image stronger on its own doesn’t always help the series. The images have to work as a collection.
Rebecca: Coming up with a story that I could properly invest myself into and was interesting to viewers.
Pablo: The hardest part was finding time to create the pieces between the challenge and my studio job. 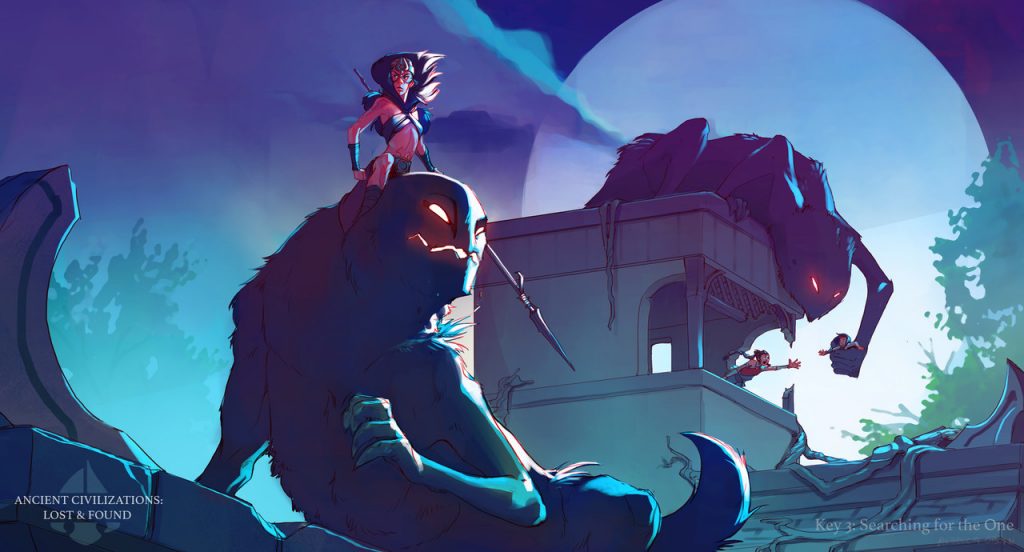 Joakim: A kick in the butt to learn 3D more! Seeing cool work from other artists. Sharing a story I wanted to tell.
Rebecca:  A new sense of motivation to put my self out there and try new things I wouldn’t usually do, you never know what you may learn.
Pablo: I learnt a lot and got some good feedback from professionals I admire, it’s amazing. 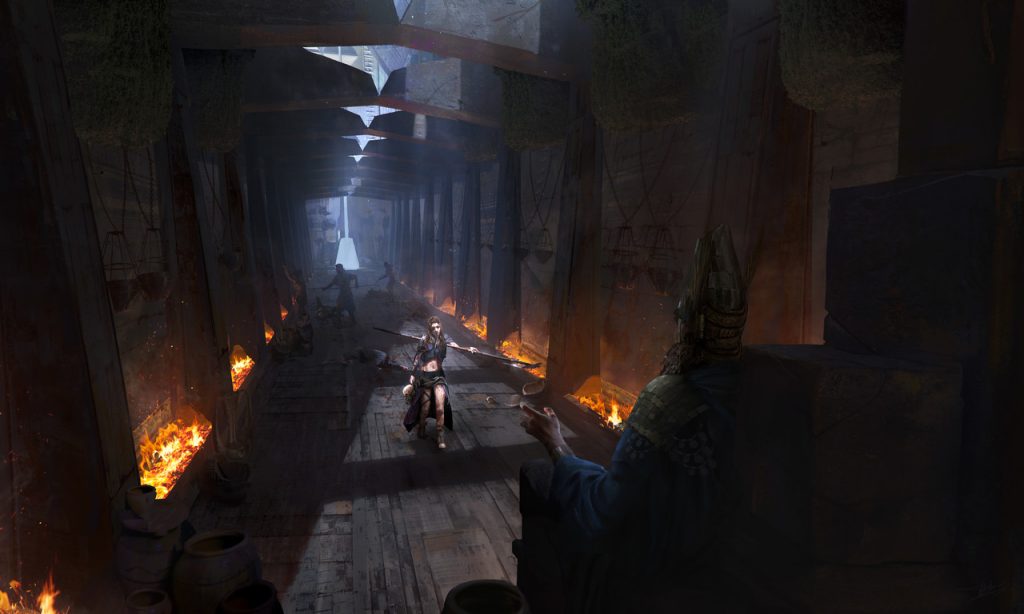 Joakim: I was a bit surprised to see so many dropouts, a shame, since we are all learning and trying to get better. I would advice future participants to make an early judgement if they will be able to finish the challenge. Then stick to it, even if you run into obstacles. Everyone does. The more we share ideas and knowledge. the more we will all benefit from it.

Rebecca: Find something you are really going to enjoy in the challenge and then take the time to plan it. That’s what I found really made the difference from my first idea to my final in this challenge.

Pablo: Try to focus on learning all you can from the experience and learn for the other challengers and judges. A year ago, the ILM Challenge was really good for my formation as a concept artist and I was only a survivor of it and I’m proud of it.  I really enjoy both of the challenges. I made friends and level-upped myself.  I will try to participate in all the challenges I can and advise everyone who can to participate and do it too! The community is amazing. 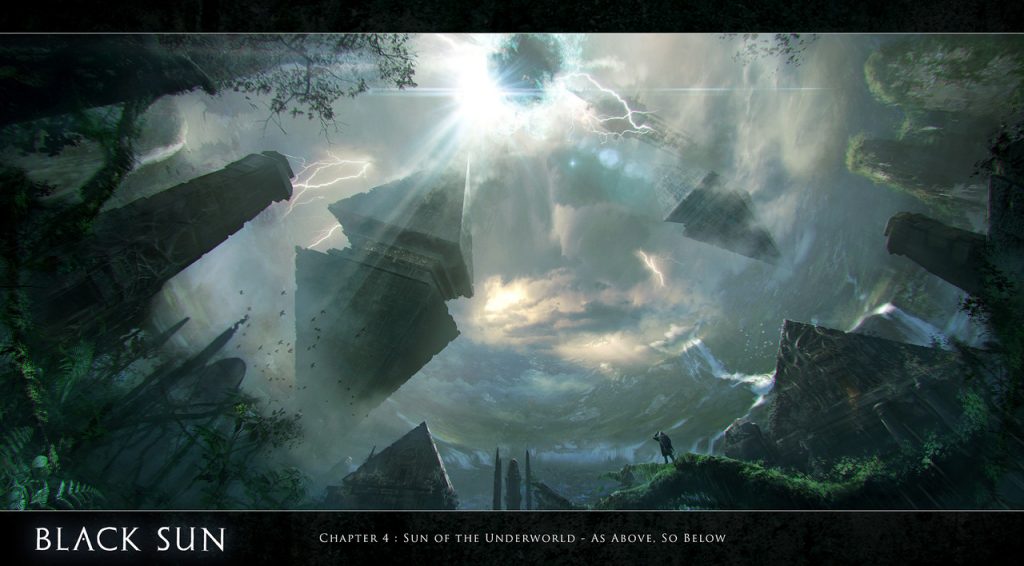 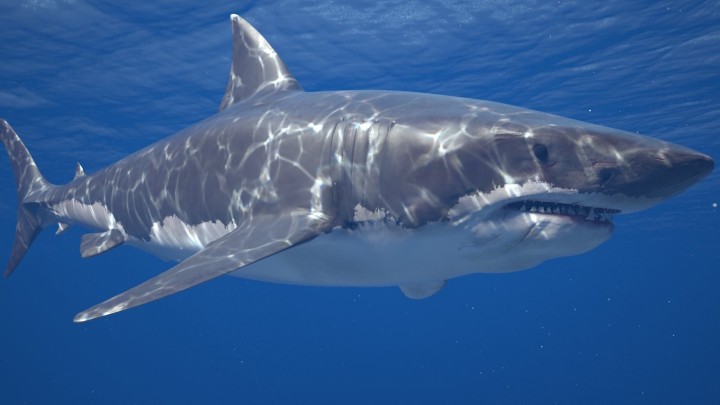 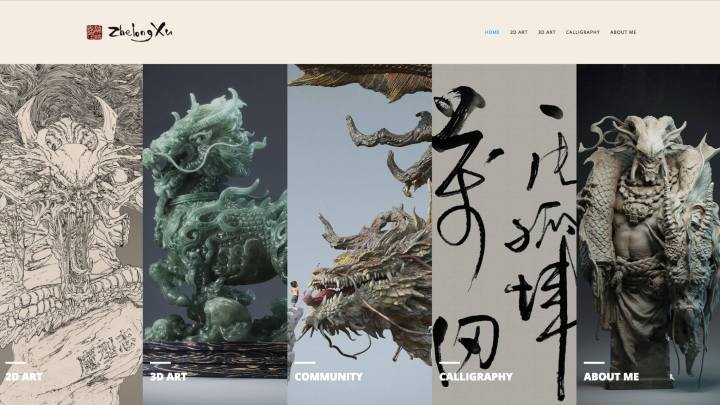 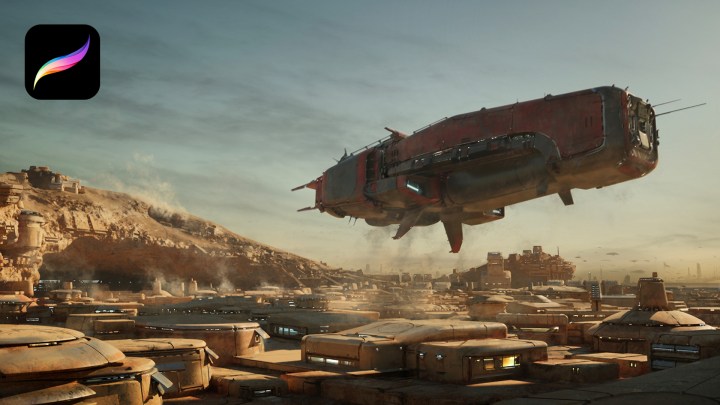 Creating an Image with 3D Renders in Procreate with Stéphane Bourez