The participants of the Prop Art –  Wild West Challenge had the task of creating three fully rendered props from the Old West.

Browse all entries from the Wild West Prop Art Challenge. 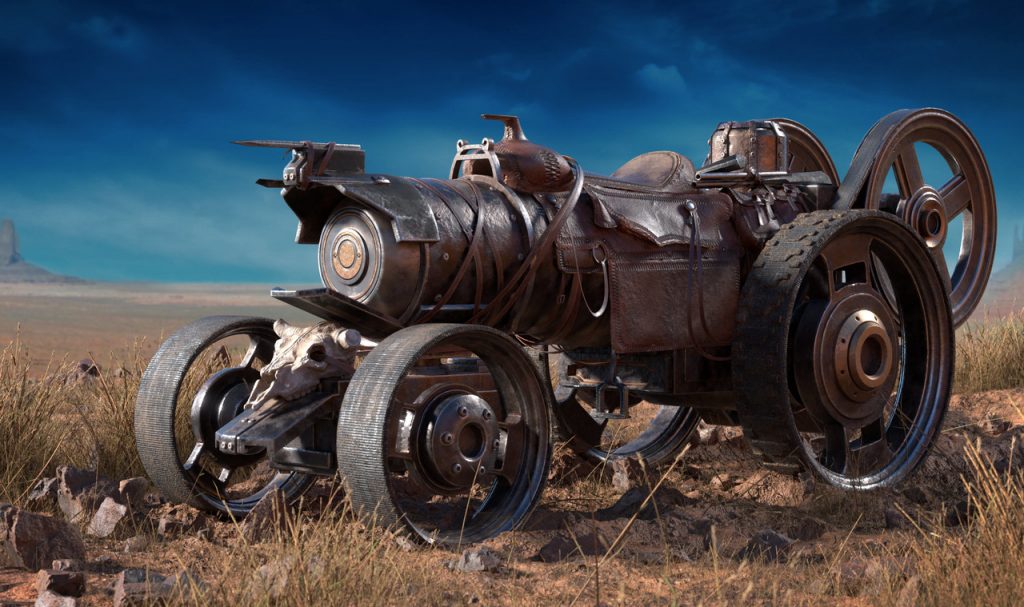 Tell us about your concept for your piece.

Lukas:  At first I really wanted to adapt someone else’s concept, but then I thought that would mean competing with other artists who do the same concept. Which means, then I’d be judged according to my technical skills which I thought were still not sufficient. Also, doing the same thing as others usually demotivates me, so I made up my own concept again. There was one initial idea that essentially gave birth to all my concepts.

I had found a video on Youtube some time ago, where an iterative algorithm is used to create a running machine with simple elements, like pistons etc. At the end, the most effective machine turned out to move somehow galloping on two legs. This gave me the idea for the Locust, a sort of Steampunk machine galloping with pneumatic power. The other assets, helmet and pump were derived from that idea to give the Locust sort of a plausible world to live in.

Bohdan: This time, I decided to concentrate on production instead of coming up with the whole idea. I mean, of course some part of the design decisions are always in the hands of whoever is working with the concept, if it’s modeler, texture artist, illustrator, lighting artist, composer but there’s always some wiggle room on HOW to make the thing when you already know what to do in general. Plus, those stunning concepts needed worthy presentation, and that’s where it all went breaking bad for this one. I chose concepts from the astonishingly talented artist, Alex Thomas. He was very kind and let me use his concept with his blessing.

If you look close enough, you will also be able to spot my silly comments about designs in his challenge thread, specifically about making quadruped vehicle a steam motorcycle, because initially I wanted to do something like it. Fortunately, Alex went his way and, as we know now, it brought him first place in Prop Design category. I think it’s appropriate to say that choosing a suitable concept is the main problem and a key component in these kinds of challenges.

Doru: The concept for the first prop I made was based on the carriage by Eugene Shushliamin. I just loved the brilliant design of it. The combination of western and steampunk elements with a bit of a sci-fi twist was an incredible blend and since I’m a sucker for mechanical stuff, this felt just right for me. I began working on the carriage as it was in the concept, but after a while I started to put my own spin on it as I’m a fan of a more “chunky” aesthetic.

I liked how the carriage was turning out and I need to make two more props, so I decided to make a small scene for it and started working on some sort of station for it. I didn’t use any sort of concept for this, but I think they turned out OK considering I’m not that good of a designer. The station later was split into two parts: a refuelling part and a luggage/waiting station.

Tell us about the strategy and process for creating your piece.

Lukas: This time I really wanted to get serious about plausibility. As opposed to my last ArtStation Challenge, I wanted to go a more realistic way, so I chose reference pictures that came closest to what I was going to model. For example, I used the wheel suspensions of a train as reference on how I constructed the “front leg” of the Locust. I also got inspired by a picture of a real duplex steam pump to define the basic shapes of my own mobile one. Of course, I tweak it until it fits my own needs, but my goal was really to make it look like it maybe could have worked.

Bohdan: It was quite streamlined and common: first of all, base geometry dummies were created. I really like to screw up proportions, so this step was necessary to keep at least main forms intact. Somewhere at this point I decided to make all three props simultaneously, so they would seem more consistent among themselves. I made geometry for Steed, then for Wagon, after that for Balloon. Then I unwrap it in the same order, then texturing etc. I forbade myself to move to the next stage of the cycle unless all three props in kinda the same state. It not only worked, but also helped me to reset my view and not to lose sight of the challenge by focusing on a specific one.

Aside from that, the whole process could be divided to a stages: 1. Blocking; 2. Clean(ish) modeling; 3. UV unwrapping; 4. Setting up the scene; 5. Texturing; 6. Compositing; 7. Making test-renders and receiving feedback; 8. repeating steps 4-6. 9. BOOM: final submission. You may notice that scene set-up came before texturing and that’s not an accident: I actually started to render tests in this kind of environment from Phase 1 to keep the consistency and to make it work “in scene” so to speak.

Doru: My first step after I decided on a concept was to start working on a reference sheet. I find references extremely valuable as the mind has a tendency to play tricks on how you remember things. After that, I analyze the concept and start the modeling process by blocking out the main shapes. Then, I start refining them while also thinking about what I can mirror, what will be visible in the final piece and what I can get away with in texture. I then start texturing while also using reference to get the look of the materials right.

The final step and possibly the most fun is lighting and rendering. This is where the whole process feels like it paid off. Lighting a prop is not very complex, but it can make or break it. Because of all the effort you’ve put in modeling and texturing, you feel the need to show off every bit of the model, but that only works to it’s detriment. I try to adjust lighting to enhance my materials, the overall composition and look. 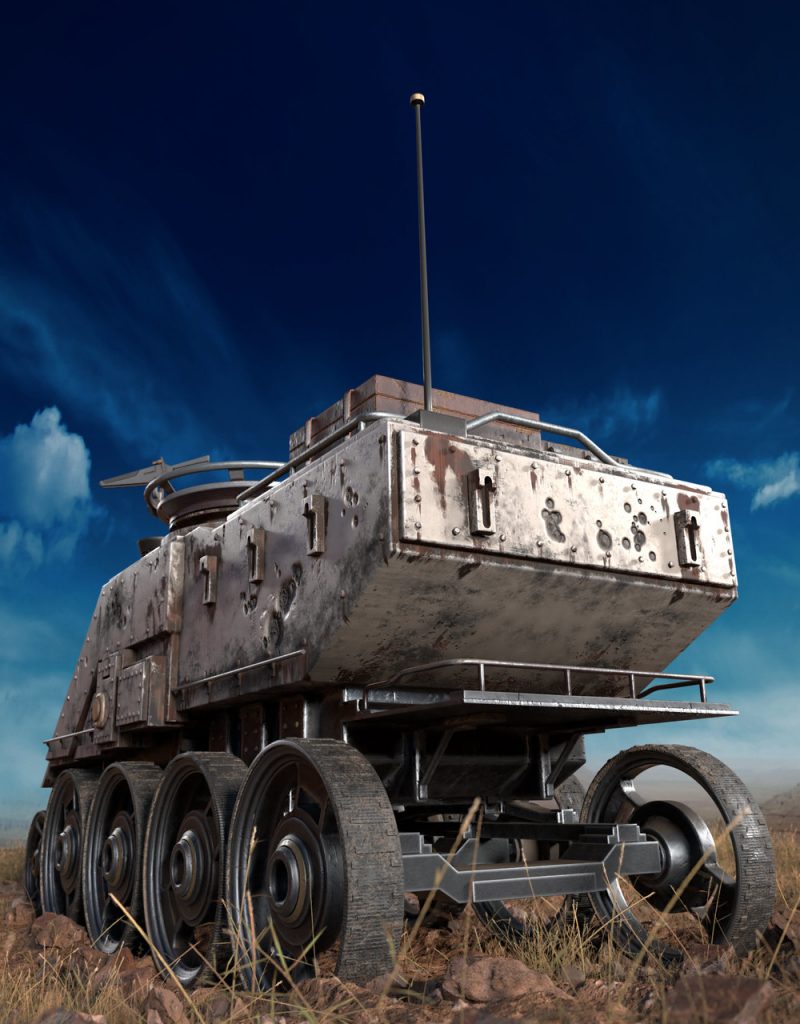 What was the hardest part of this challenge?

Lukas: I  guess it would be coming up with a truly original idea. At first I thought, well, Wild West – there can’t be possibly anything that hasn’t been tried yet! But then, all the other amazing entries proved me wrong, and I finally came up with a concept that I felt very comfortable with.

Bohdan: The Challenge wouldn’t be fun if you won’t make it harder for yourself, right? So I made a promise to post every single day in my WIP thread. From all 25 days of the project, only the 7th and 14th day are missing. That’s quite an achievement, I think. You may also consider that time limit is also a tight part of this project, especially since I cut it in half and actually started to work on it in June. Actually it helped in a way, since I came to a finish line pretty exhausted and there was still a whole week to the official deadline!

The hardest challenge of them all: losing sight of the situation and starting to procrastinate in a weird way like changing background brightness from 0.5 to 0.4999 and backwards over and over again. I think that’s the part you should avoid and just be sure of what you’re doing. It’s much better to take a break in that moment of crisis than to tickle values aimlessly. It’s a huge time and nerve saver tip!

Doru: I set myself a challenge within the challenge to use only procedural materials and no UVS. I accomplished that about 98%. This proved to be a lot more difficult than I had anticipated, but I learnt a lot about the process. On a different note, trying to get some work done daily proved to be a challenge, as spending whole weekends working is not as much fun as one would believe. Rest, relationships and life outside work is very important. 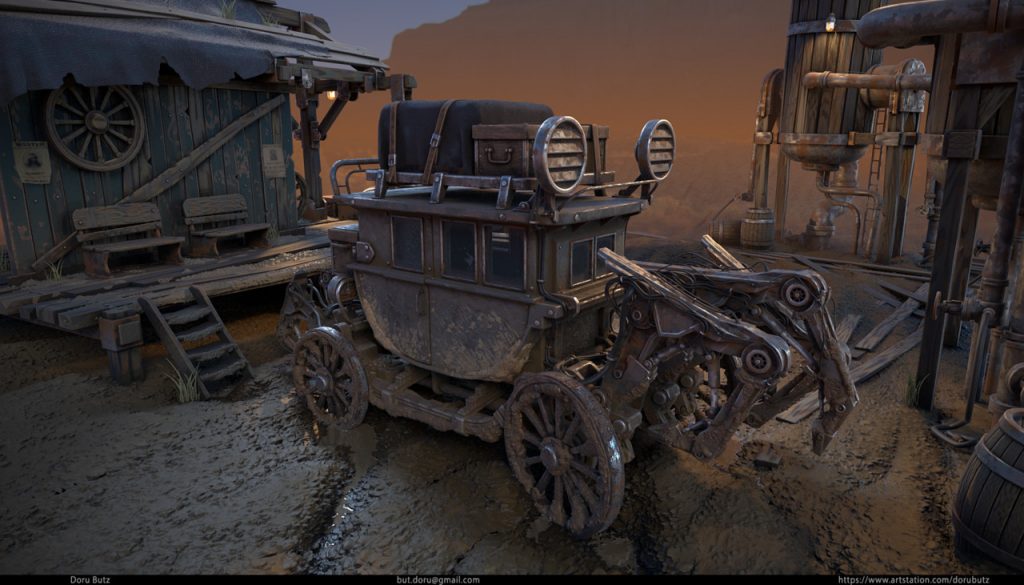 What other submissions stood out to you?

Lukas: I think this challenge was especially strong in the concept phase. The entries that stood out for me where the ones by David Ardinaryas Lojaya, Tony Sart and Chang-Wei Chen. But of course, there were also amazing entries in the production phase, such as the ones by Stavros Karagiannis and Georgian Avasilcutei. My friend Zacharias Reinhardt once again proved his remarkable talent for time management and delivered an insane result in an incredibly short period of time!

Bohdan: I was literally surprised when results were announced since I’ve hoped for an honourable mention at best – that’s how tough the crowd of challenge seemed from the inside.

I was stunned by the insane amount of work and detail put into submissions from suraj jangid and Maikel van Hoof;  the epic scale of assets in Alexander Reznik‘s and Sylvester Dorgu‘s works;  the absolutely incredible attention to detail on seemingly small assets by James Horn and Praveen Nagar; the amazing props and especially the steam motorcycle by Matija Švaco; the breathtaking storytelling gun by Tanner Hartman; the unearthly props from Anton Fomenko; the approach to the props as a whole by Jason Evangelista; the mind-blowingly artistic props by Tim Curry and Dawnson Chen, and an inventive approach to interpretation of the original concepts in Oleksii Tkachuk‘s works.

Of course, the work of the finalists stood out. Lukas Walzer‘s props look like they were taken straight from the promo-materials of some kind of wild and epic new western movie and Doru‘s props all work together in a single scene, forming a whole set from themselves. There were a LOT of others submissions.

Doru: Since I’m an environment artist, I loved some of the environments that were created. Besides the winners and honourable mentions which had some AMAZING work, I really liked Vanessa Boelke‘s gorgeous snow environment and Justine Hamer very stylized look. From the Game Character submissions, I loved Nikita Svechnikov and Farzin Izadyar‘s entries.

Lukas:  I really got better at hardsurface SubD modeling. That is something I now feel quite confident about. Also, I learnt how to work in a more structured way than in the last challenge.

Bohdan: A lot. First of all I discovered that friendship is magic, even if it’s in the form of getting feedback from complete strangers because it helps you to make your work better. Their advice won’t turn your work inside out, but it REALLY helps when you need to test the perception of your work on someone else. That feedback really helped me to change dull pictures to something more interesting or shall I say, “appropriate”. Special thanks to the user, ChameleonScales, from the Blender Artists forums. Without your help that balloon would looks even more ridiculous than it seems now. So that’s a lesson: request feedback and close your gestalts.

Doru: I am amazed by the amount of talent that the ArtStation Challenge gathers. A few of my long time heroes entered and even helped me along my journey and I’m extremely grateful for that. I loved the amount of friendly competition, encouragement and feedback I saw from almost everyone. It was truly an honour to be counted among one of the winners of this challenge. 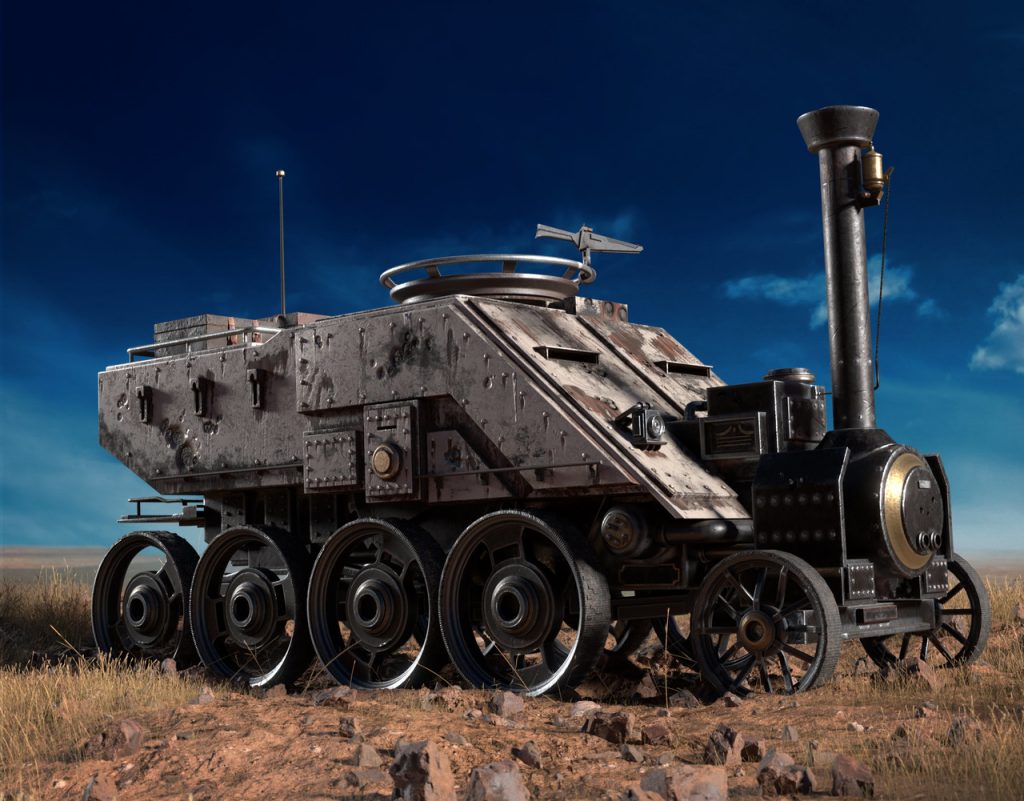 Browse all entries of the Wild West Prop Art Challenge. 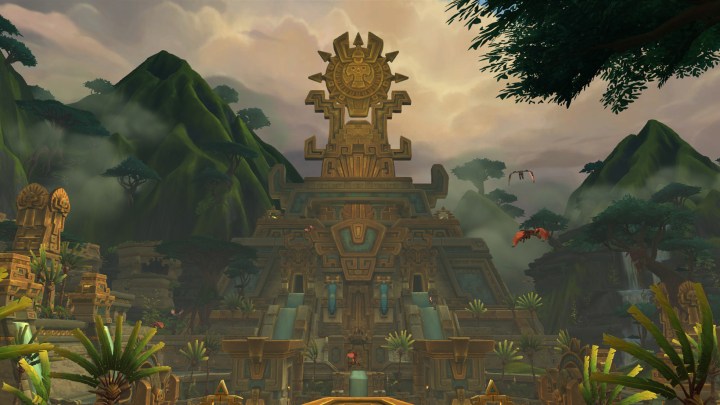 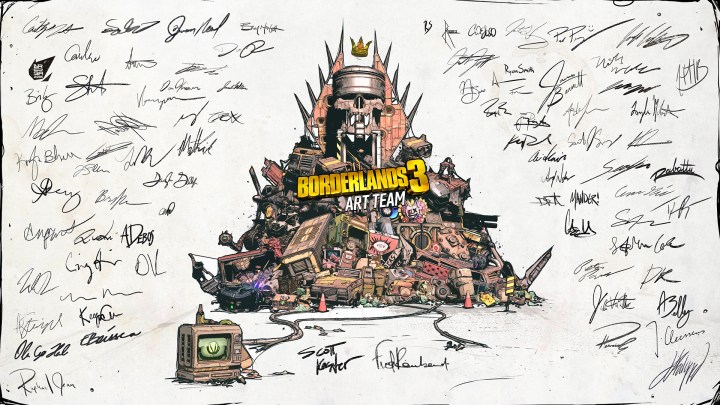 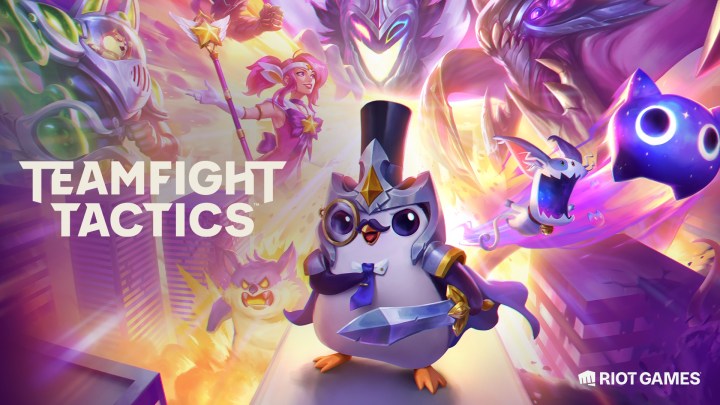