“Let’s see . . . if I were to describe a day in the life of modeling at Blizzard . . .” mused senior character modeling artist Jason Huang, struggling to find where to begin. And I don’t blame him—the Blizzard cinematics modeling team consists of a small group of full-time modelers who contribute to six IPs and 6-10 cinematics per year, who work across multiple game universes that are stylistically very different.

Blizzard Entertainment celebrates its 30th birthday in 2021. Over the years we have tried to consistently push the quality and the polish of our iconic cinematics. Blizzard cinematics is part of our Story and Franchise Development (SFD) department—our own cross-franchise creative studio which now comprises of a huge group of artists, writers, and more. Within SFD is essentially our own little animation studio, which is where this modeling team is situated.

While each modeler has a specialty—such as anatomy, robots, architecture—all can operate in whatever style required. “That’s what makes this team so special. You don’t know what you’re going to work on next, but you have a core, solid set of IPs,” said modeling supervisor Shannon Thomas. “Flexibility and diversity are what makes our group. The fact [that] they can pivot and do super-realistic stuff on Diablo then jump to super cute and appealing work on Hearthstone in the same day or week. It’s very frequent that within a year, you’ve worked on two, three, or five full-on short films—either in contribution or as the sole modeler.” 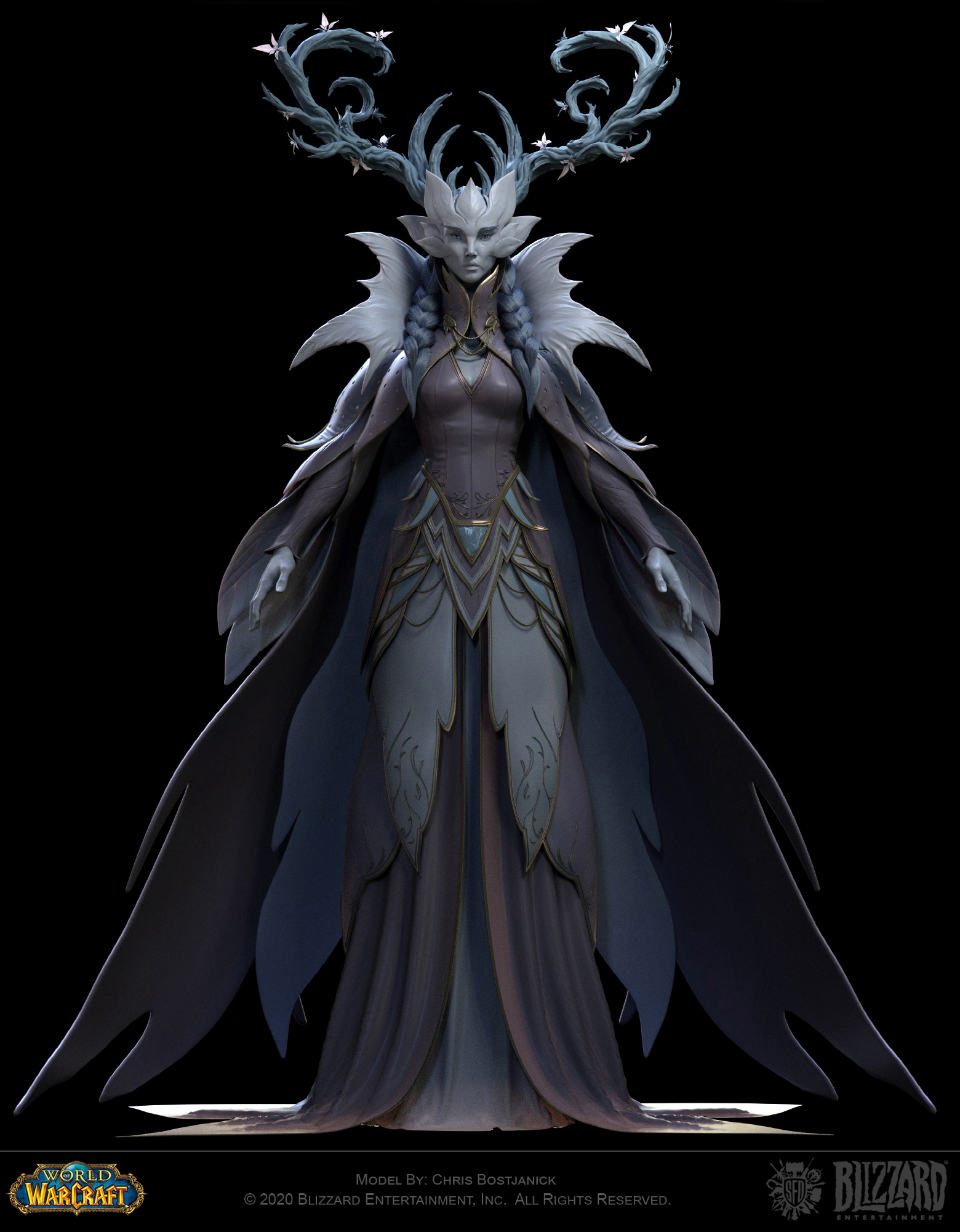 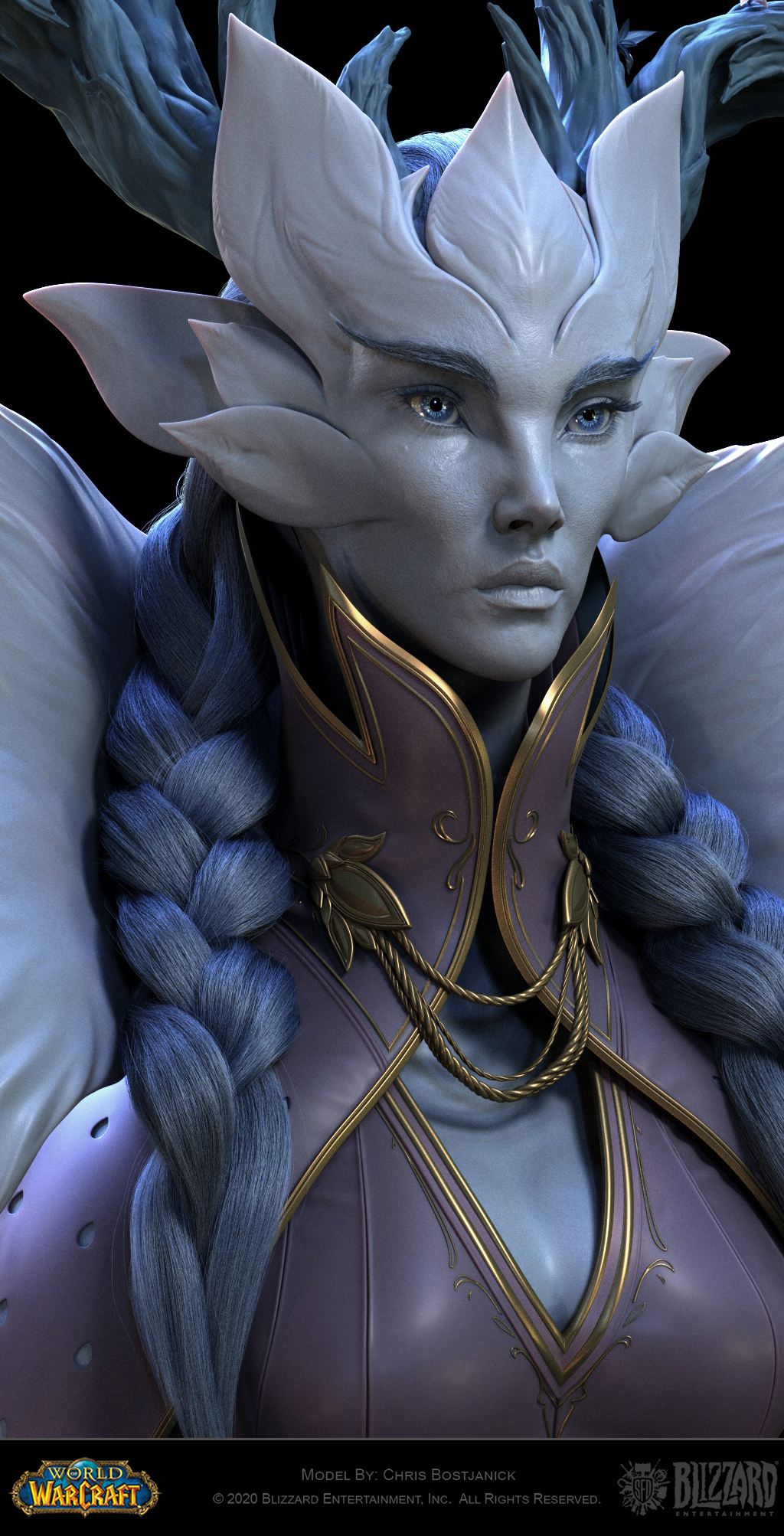 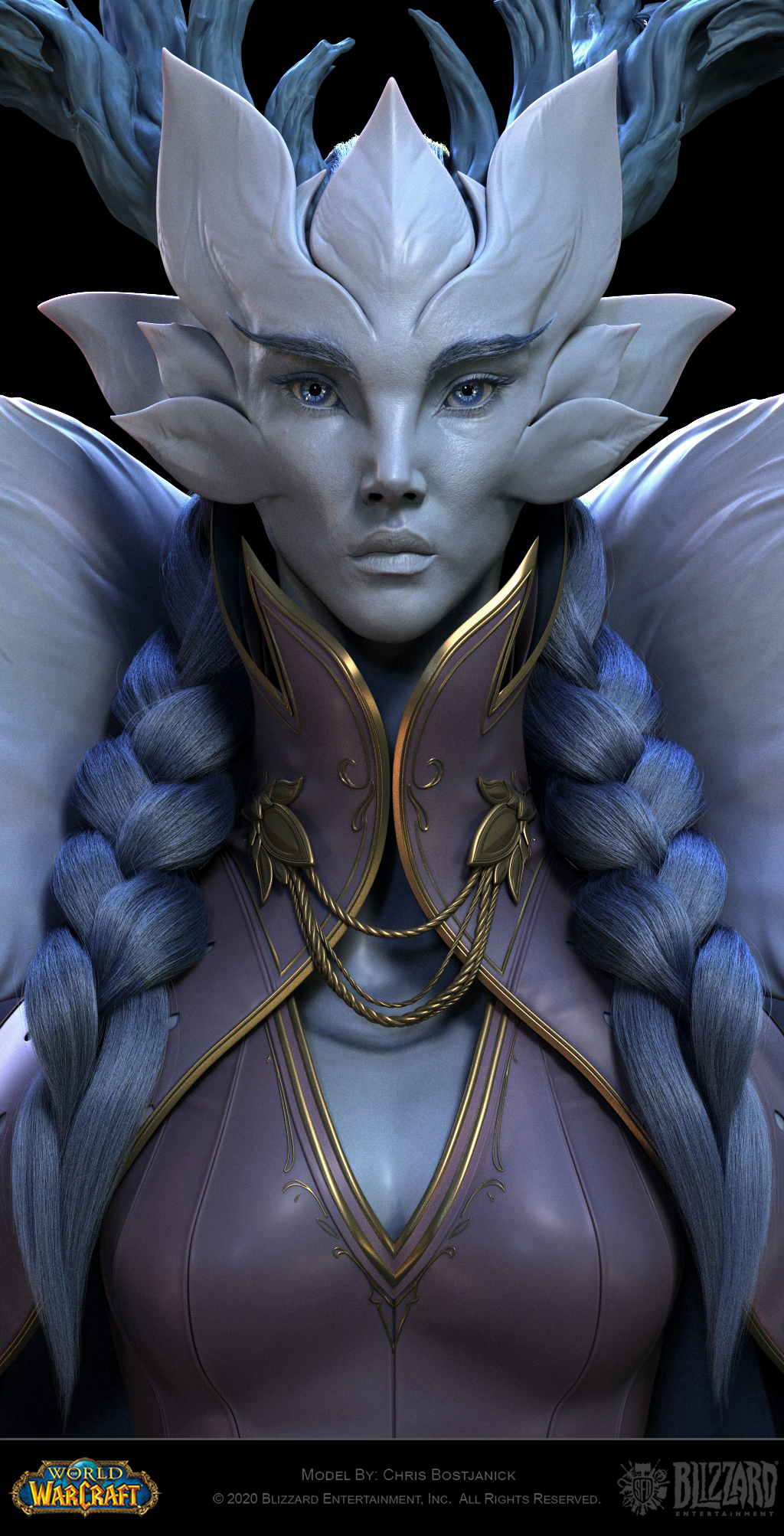 The Blizzard cinematics modeling team is made up of both character modelers and environment modelers, and each must work with different workflows. For character modelers, there are two general starting points. “One is we get a pretty robust concept art that we can try and translate into 3D,” said senior character modelling artist Kenny Huang, “and the other would be slightly more exploratory—where we aren’t given something as defined—and we try to work with either the director or the art director to try and find something they like.”

In either case, it starts with a digital sculpt, which is then iterated upon in partnership with the director of the cinematic and the art director of the IP. Depending on the task, the character modellers sometimes have the freedom to explore. “We put a lot of our own personal takes on what the characters are, how things look,” said senior character modelling artist Kenson Yu. “I find stuff from nature, for example, talk to [the directors] about it, incorporate it. Sometimes I just do it and take it to them, sometimes they’re cool with it. A lot of the time, they are pretty open.”

For environment modellers, they work in a camera-centric workflow. “On the character side, a lot of times they build ‘for the round’—ensuring the asset looks good from all angles,” said senior environment modelling artist Aaron Hamman. “On the environment side, we can focus on refining what is specifically visible through the camera. We call this building to the shot.” Similar to the traditional film pipeline, SFD has a storyboard group and a pre-vis group, and the environment modellers get involved with them pretty early. “Our first task on every show is to block out rough shapes for pre-vis to use to work the cameras out,” Aaron explained. “We begin our work by quickly blocking in form at an extremely low resolution in order to capture a faint expression of the world. At this stage, it’s all about large shapes and composition—it should look about right if you stand back 10 feet from your screen and squint.”

These low-res builds are sent to pre-vis, who set up their cameras and check the compositional flow. “Once the director approves the rough cameras, lens, focal length, speed, and timing of the shot, that’s when we really get started,” Aaron said. “We get the camera delivered, we go through the set and do what’s called ‘assetizing’—we look at the set and we evaluate what are the things that need to be built as unique elements versus what can be repeated.” After taking inventory of the unique builds, they are split up among the team. Then one person, typically the lead environment artist, will wrangle those models and create the final layout. “It’s basically a reference of everyone’s work in a scene, properly placed,” Aaron said, “and that becomes the official environment that the downstream departments can use.” 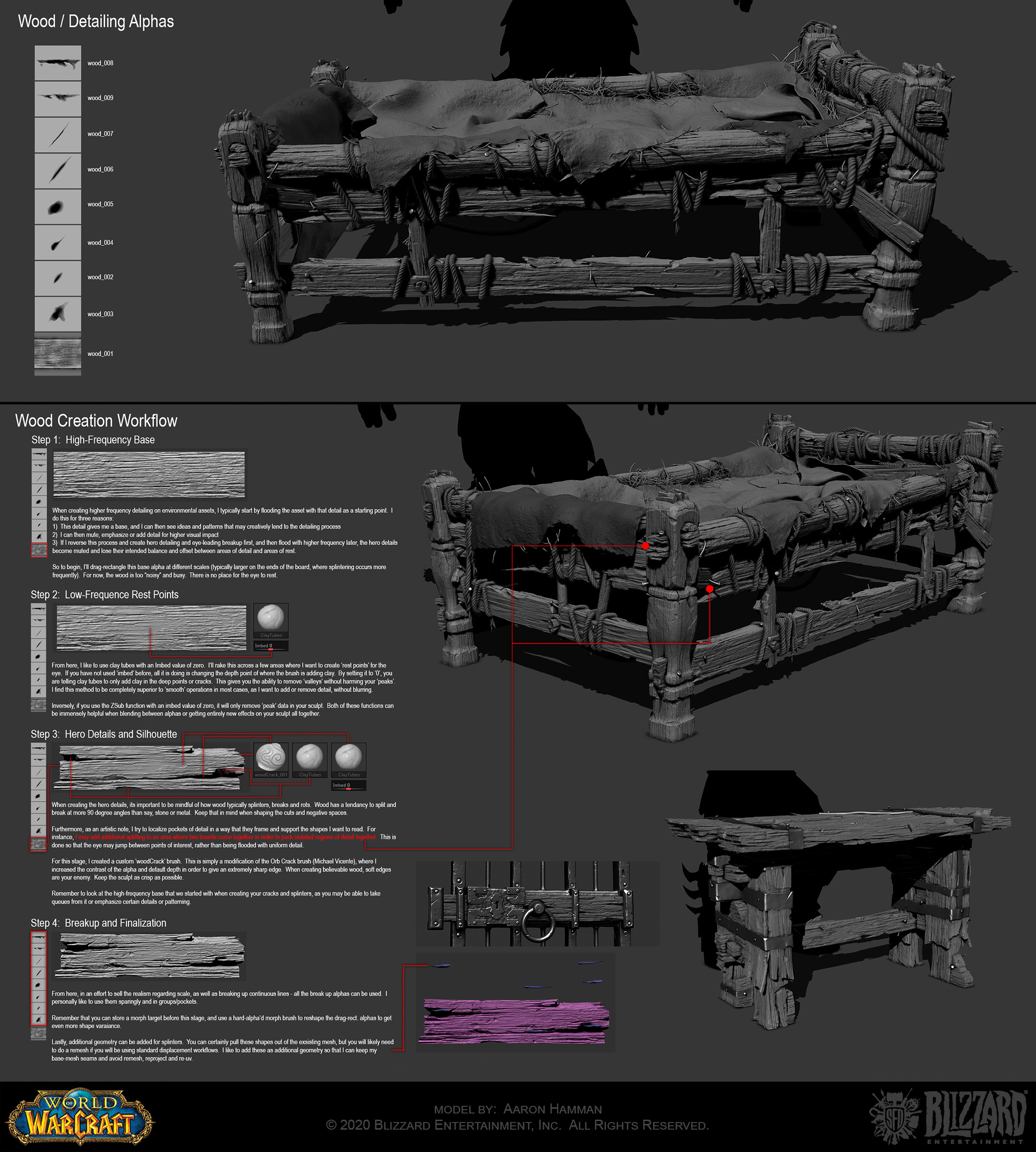 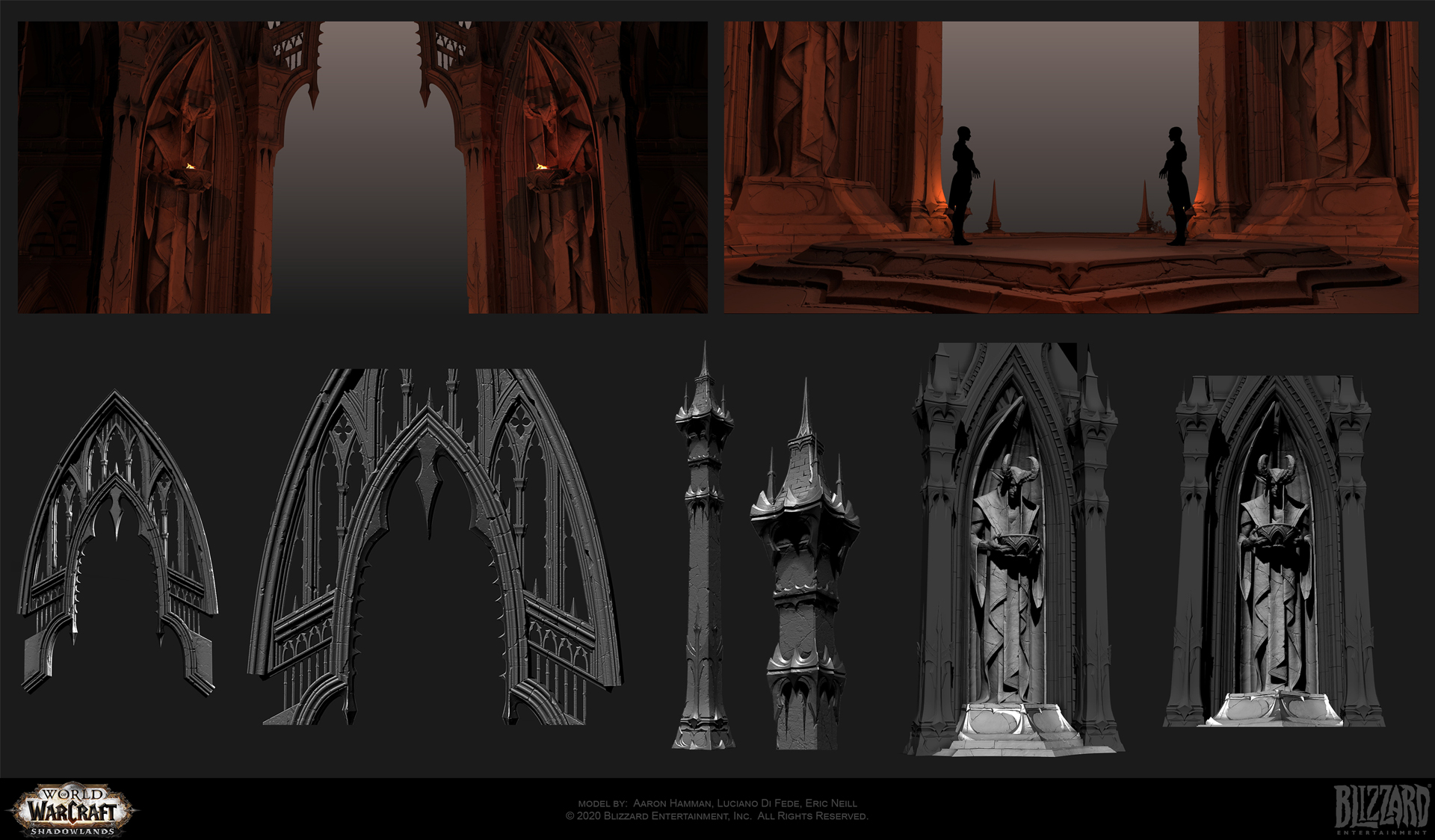 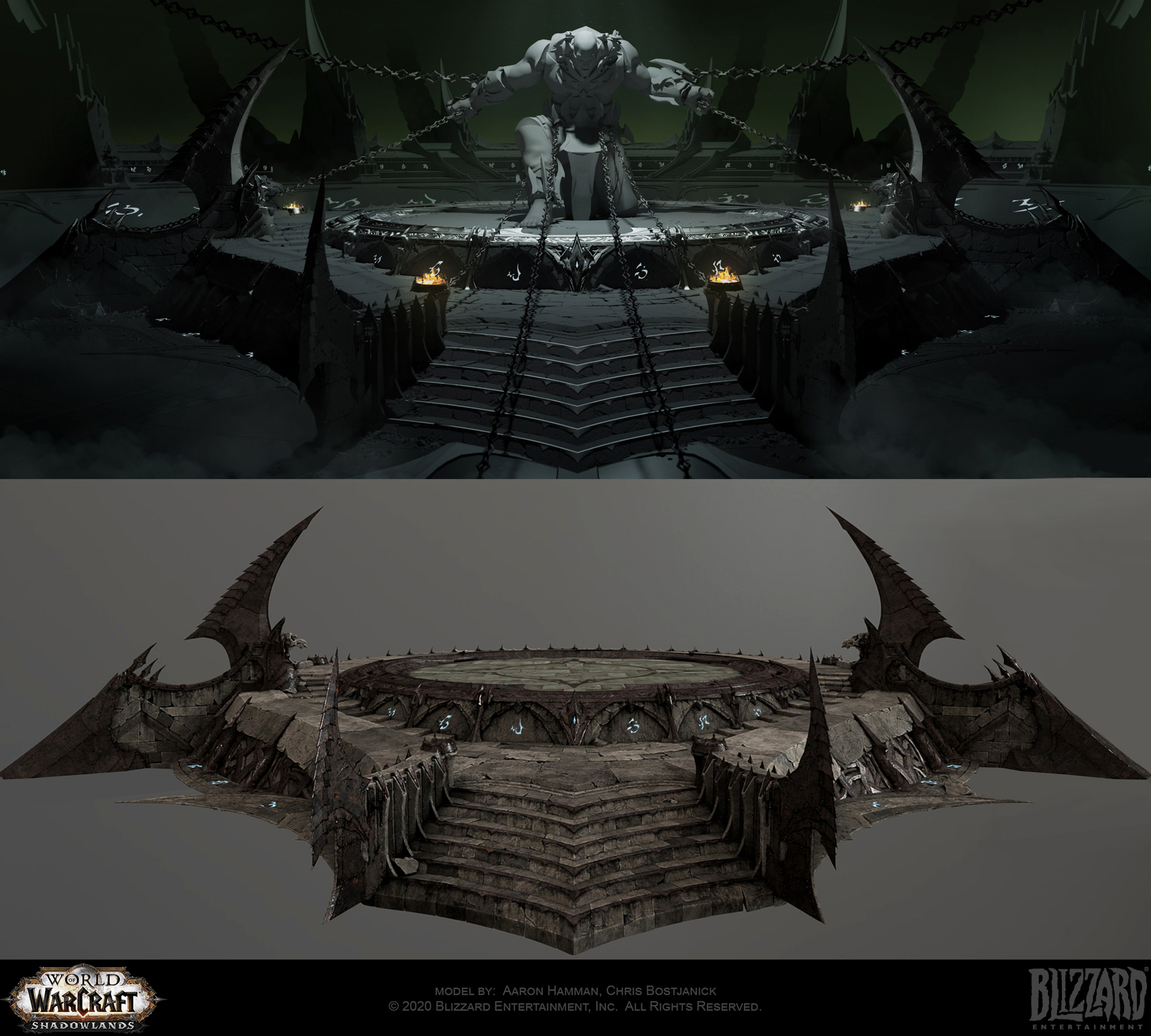 Each short Blizzard creates will have leads for both character and environment modelling, and a supervisor and producer to support them to help assign people to certain tasks, manage workload, prioritization, and to catch any delays or issues as early as possible. Shannon tries to cast his team to their strengths but is also mindful of areas in which modellers want to grow. “If a character artist wants to do a specific character, I will make sure they get the opportunity to do that, or if an environment artist wants to try to do a character,” he said. A 15-year veteran of the industry, Shannon has learned from his experiences and tries to avoid pigeonholing people. “I saw modellers getting stuck doing trees,” he remembered, “and them being like, ugh, I don’t want to do anymore trees. ‘Well, you’re so fast at it!’ That kind of stuff plays out everywhere and isn’t super creative. It’s important to me to keep people excited—not burned out, and not bored.”

One of Blizzard’s core values is “embrace your inner geek,” and for the modelling team, this manifests in a few ways. One is their periodic free-sculpt jam sessions, which they take part in together. Here, they work their creativity muscles around a set topic—for example, Halloween or cyberpunk—and share their work with each other afterward. Jason says these sessions help provide balance and keeps their creativity on point.

“During production, we are focused on achieving the director’s vision of the asset and how it can best help tell the story,” Jason said. “Once, it has been artistically approved, there’s a big chunk of our work that is technical, getting these assets useable in the pipeline and supporting downstream departments. These sculpt sessions are a great time to let loose and just be artistic and creative.” 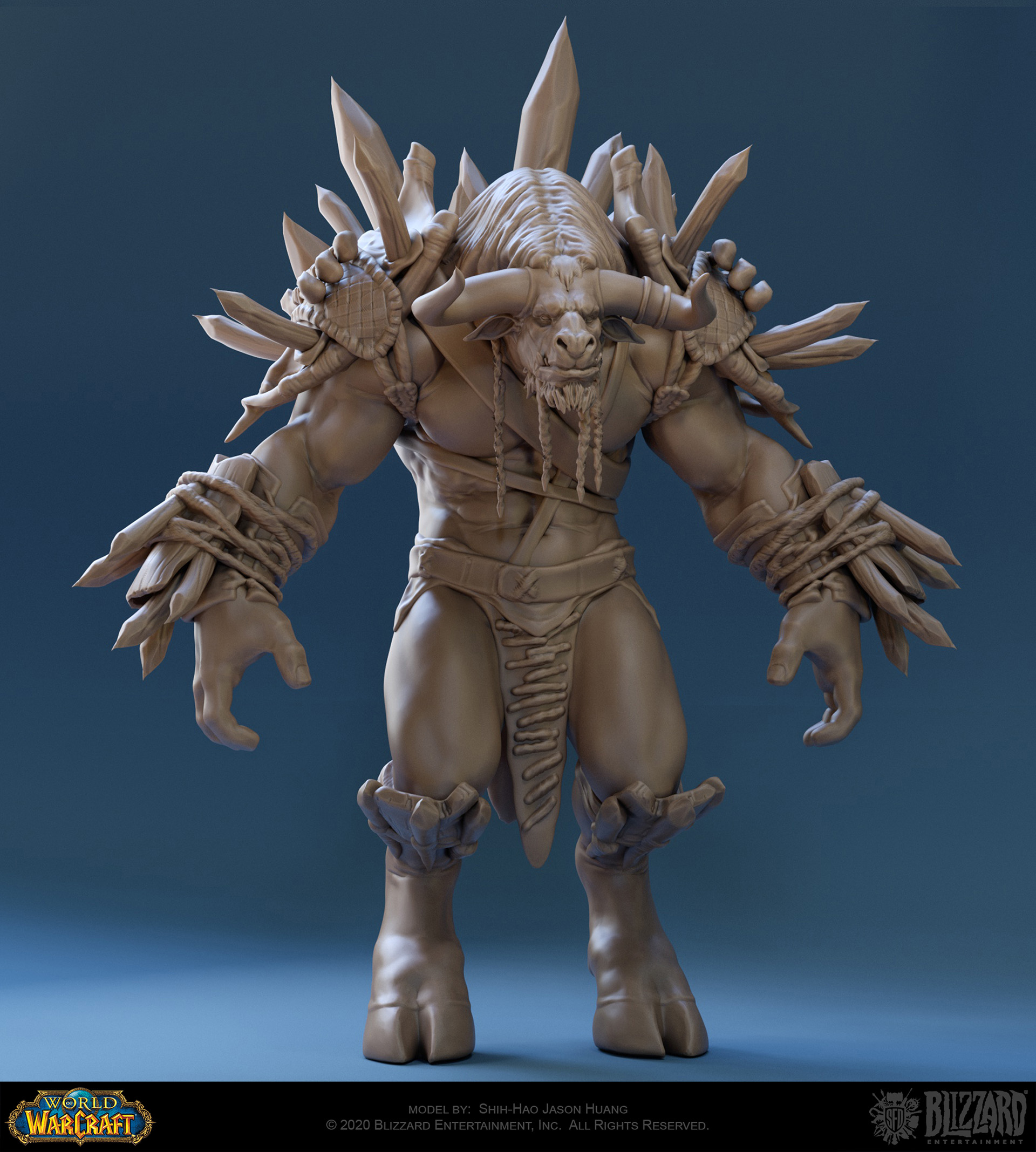 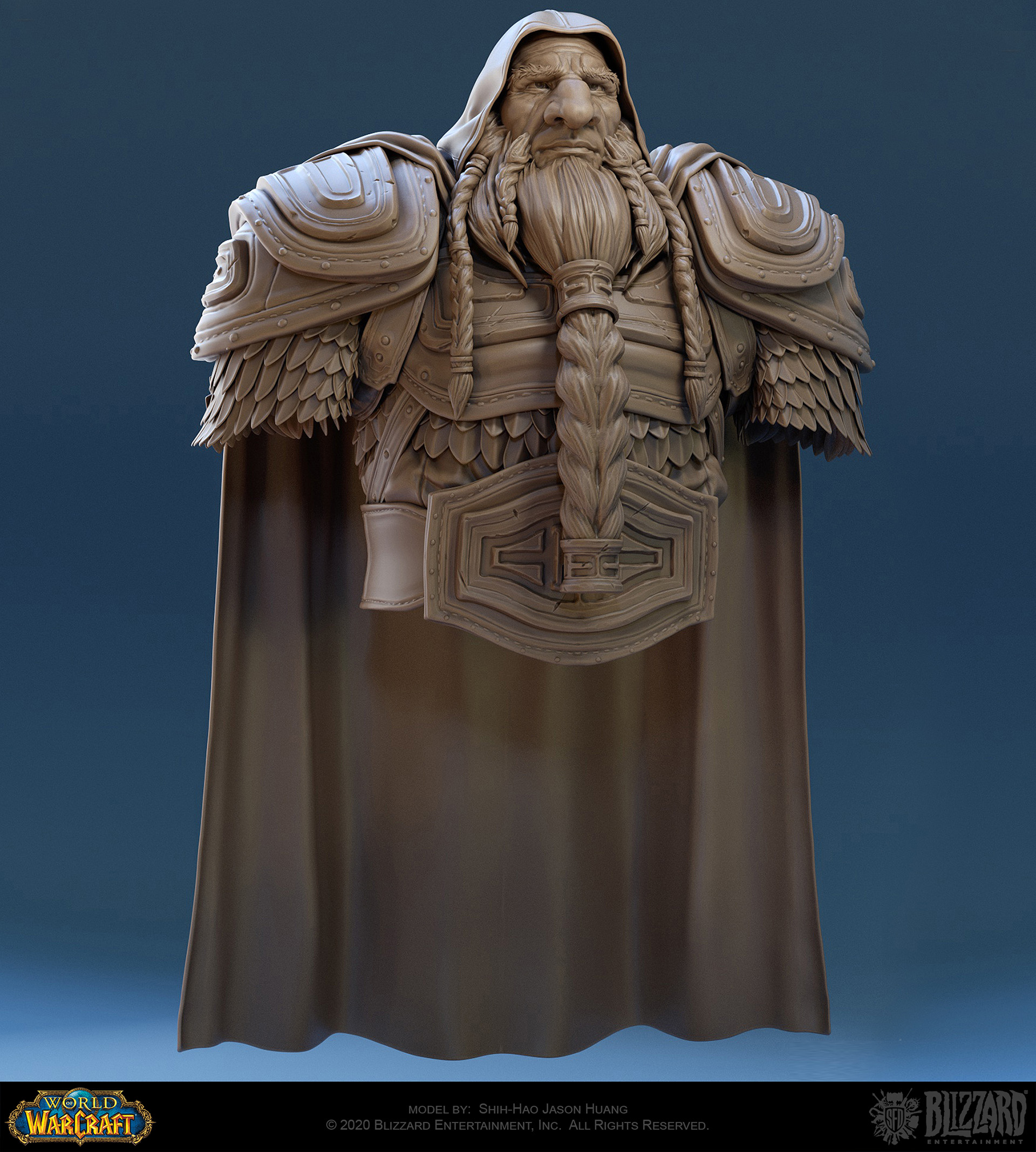 Before Blizzard moved to working from home earlier this year, the team regularly would regularly eat lunch together, and would sometimes watch shorts together that are inspiring or just plain cool. Then, of course, there’s good old-fashioned games, which they still partake in often. “We play a lot of games together,” Kenson said. “We have a blast, we’re all pretty good. I play a lot of Mei—they like when I play Mei because I troll people a lot. Especially with COVID, being stuck at home, it’s so fun to play together.”

Kenson Yu has been at Blizzard for 18 years as a character modeler and says it’s the standard of Blizzard cinematics alongside the art itself that keeps him here. “We put a lot of time into our artwork,” he said. “Everyone’s personal art skills are strong, and if you carry that into full production, that expresses each individual person at Blizzard. It makes the cinematics that much stronger.” 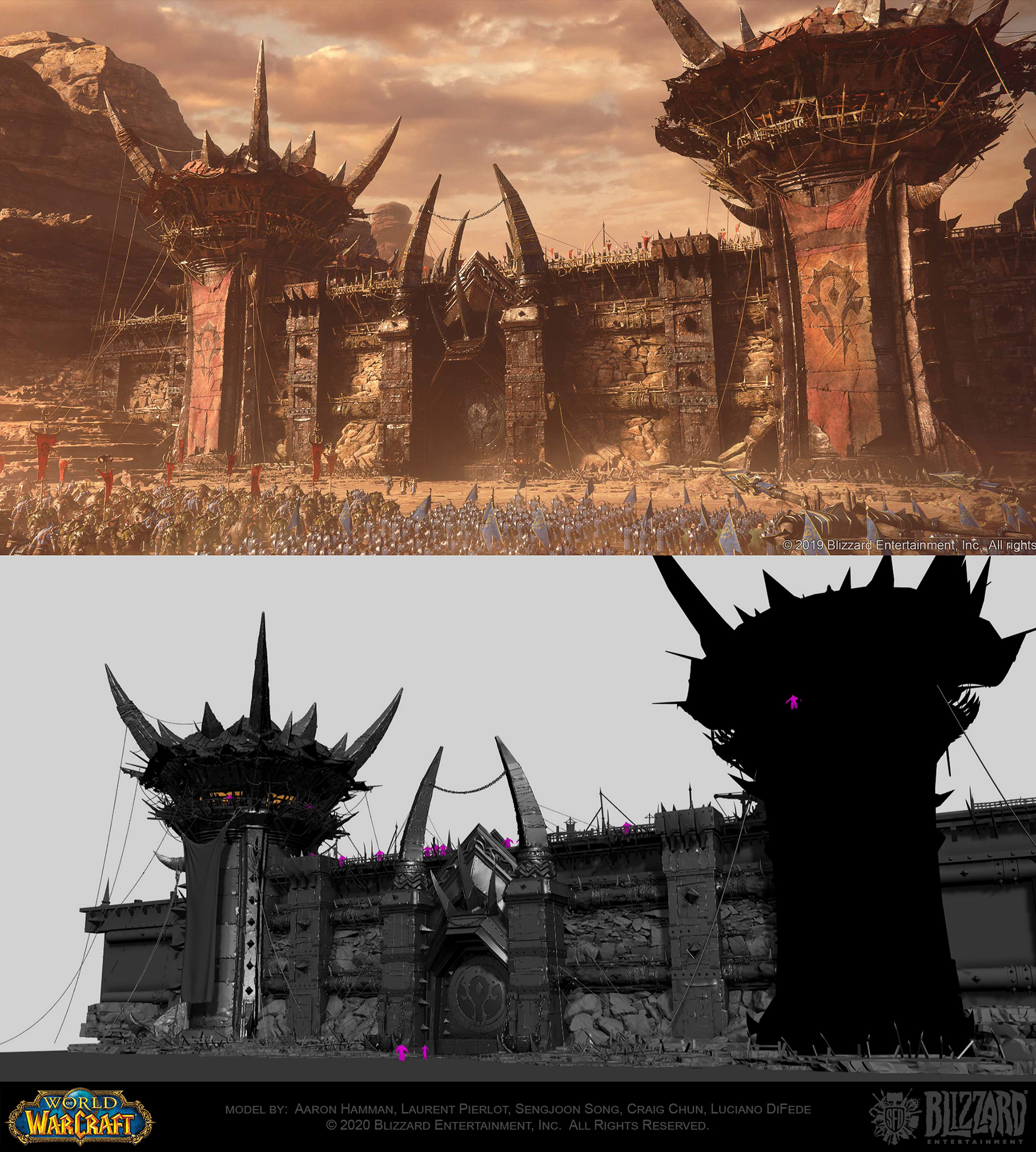 For Aaron, working at Blizzard was a dream of his since he was 8 years old. “I spent over a decade in the VFX and game industry, shuffling around before the stars aligned. What I enjoy is, the content I work on is the kind of stuff I would do as a hobby in my free time. Getting a paycheck to create this cool stuff is insane to me,” he said, pausing for a second. “Don’t tell my boss I said that!”

“It’s very hands-on here,” said Shannon (Aaron’s boss). “It’s implied you are here because you care so much about your day-to-day, you don’t want to just be on a cookie-cutter assembly line.” He believes our cinematics come out the way they do because everyone along the way, every single person, is always bringing both their technical skill and their artistic sensibilities to the table, no matter the universe and no matter the style. “Each of those styles is so individually different that creatively, as an artist, I find that to be what drew me to Blizzard. To create demons, to create fantastic characters—to be able to do that on one team is pretty awesome.”

Senior character modelling artist Taso Gionis says Blizzard gives him space to learn new things, which he loves. After expressing an interest in learning texturing, his manager gave him the opportunity to learn on the job (Taso’s texturing is featured in Diablo IV’s “By Three They Come”). Now, he’s doing the same with rigging. “I’m in an environment where I am free to say ‘Hey, I want to try this,’ and no-one says ‘no, this is what you do, this is what we hired you for.’

For anyone aspiring to work at Blizzard one day, Kenny says flexibility in style is important. “Flexibility does trump specialization in our case. Even the artists we have, they do have their specialties, but everyone is still competent in doing everything,” he said. “Some people are faster at modelling hard surfaces, mechanical things, some people are better at more organic, but everyone has a baseline. So it gives us flexibility to play around with the chess pieces, I guess you could say, in that way.” The whole modelling team also agrees that the balance between technical skill and creativity is key. “I would look around ArtStation and find the best stuff,” said Kenson. “If you can do the equivalent of what some of the awesome artists on ArtStation can do, then you’re in a good spot. You want to be unique too, have something that stands out from the crowd. If you have good ideas, don’t try to follow the mainstream—put out your own unique ideas.” Beyond the Veil: Shadowlands official trailer

Blizzard is always looking for professional artists and animators to join our ranks. We hire from all over the world and have Art & Animation openings across our Story & Franchise Development teams. Check out our current roles and apply if you see a potential fit, we’d love to hear from you!

About the author Amelia Savery 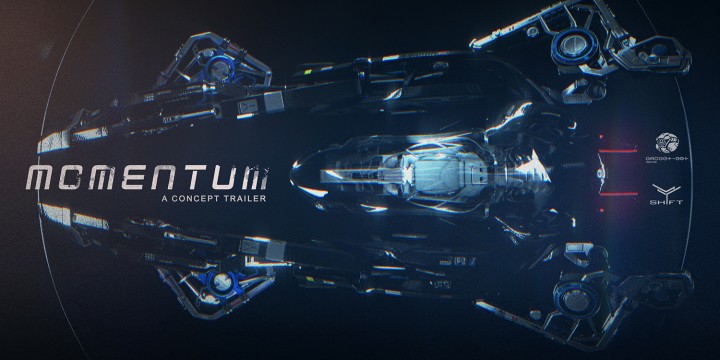 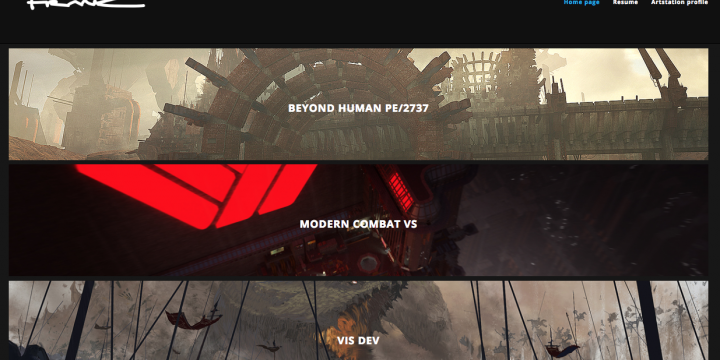 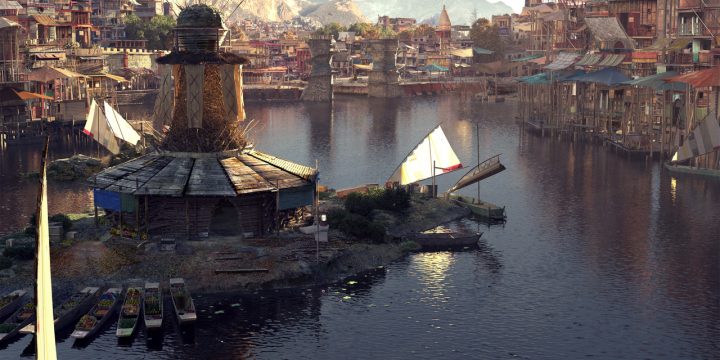