Last June, The Foundry acquired Mischief, a little-known but highly intriguing new digital sketching app. One year and over 80,000 downloads later, we explore how Mischief has evolved, what currently makes it unique – and the role that ArtStation users can play in the software’s future development.

Right from the start, it was clear that Mischief wasn’t going to be any ordinary drawing package. An artist’s tool created by a research scientist, it arose out of collaboration with both knee surgeons and Disney animators. A $25 app now developed by a company with a background in thousand-dollar visual effects software, its underlying technology is used not just in graphics software, but Kindles and mobile phones. It’s a sketching tool that’s equally at home with note taking and mind-mapping. It’s a sandbox for creativity. And even its creators don’t know exactly how you’re going to use it.

A brief history of Mischief Since childhood, Mischief creator Sarah Frisken has straddled the boundary between art and science. A shy child growing up in a musical family, her parents enrolled her in painting classes when group piano lessons proved too much of a social ordeal. As a teenager, she took all the art courses her high school offered – to this day she has, she revealed on the Mischief blog, “a closet stuffed with sketchpads” – but when she enrolled at university, it was to study not fine art, but engineering.

In 1993, following stints at both MIT and Carnegie Mellon, Frisken was hired as a research scientist by Mitsubishi Electric Laboratories, the electronics giant’s R&D organisation. It was at MERL that she would begin her work on the technology behind Mischief: Adaptively Sampled Distance Fields.

A scalable, efficient way of representing both 2D and 3D forms, ADFs originally arose out of work on computer-assisted knee surgery. “We couldn’t represent a knee as just a mathematical equation with some distance: you needed to sample the space within which that knee sat, and the distance in that space,” Frisken told fxguide. “If you just sample at a very high rate, you get a huge volume of data, and that makes it slow to process and render, so we started looking at ways to reduce the number of samples you needed, and we came upon using an adaptive sampling of the space.”

That ability to represent complex forms in a format that even low-powered devices could process led to one of the first commercial uses of ADFs: the Saffron Type System, used by Amazon to render text on its Kindle e-readers, and by cell phone manufacturers to display Asian fonts more attractively.

Frisken, meanwhile, had begun working as a consultant for Disney Research, including several weeks spent with the team creating 2D animated feature The Princess and the Frog. That opportunity to discover what artists really needed from their software led directly to the creation of Mischief.

“By the time we finished the product, that group had been disbanded,” she told fxguide. “[But] one of the wonderful things about our contact with Disney is that … I was always going to retain the IP … and it felt like we had something pretty special in terms of a drawing program.”

That “pretty special” drawing program was released initially by 61 Solutions, the start-up Frisken founded with fellow ADF researcher Ron Perry, and later by The Foundry, which acquired 61 Solutions last year and turned it into a wholly owned subsidiary, now renamed Made With Mischief.

A tool with no learning curve

Although The Foundry is best known for tools designed to tackle the fiendish complexities of visual effects work, Mischief is a much less intimidating experience for first-time users. “Nuke looks like the cockpit of a fighter yet, and rightly so,” says Foundry CEO Bill Collis of the firm’s industry-standard compositing package, contrasting it with Mischief’s “incredibly beautiful and direct” interface. North Front Studio founder Ryan Dening sketching in Mischief in an ArtStation video tutorial. “Mischief doesn’t have all the tools of Photoshop [so] it’s more like using a sketchpad,” he says.

In fact, on opening the software for the first time, you could almost imagine that Mischief doesn’t have an interface at all. On launch, the program presents users with a blank white canvas. In one corner of the screen, there is a discreet colour palette; in another, a pared-down set of brushes. There’s a layers palette, and a toolbar with just nine options. And that’s pretty much it.

It’s only when you begin to move around that canvas that the true power of Mischief becomes apparent. For a start, the software has a 50-trillion-to-one zoom factor: something that Sarah Frisken describes as “like sitting on the moon and [being able to look] at a single flower on Earth”. Thanks to the underlying ADF technology, strokes stay crisp and sharp no matter how far in or out you zoom, and thanks to Mischief’s infinite canvas, you can pan as far as you like in any direction.

If it sounds like Mischief should be good for creating ultra-large, or ultra-detailed, images, that’s certainly true: you can paint tens of thousands of brush strokes without any noticeable lag when zooming or rotating. But thanks to that responsiveness, the software is equally well suited to spontaneous sketches as detailed concepts. Its real secret may not be the complexity of the images that it can create, but that it’s as close to the experience of sketching with pen on paper that you can get while using a computer. And that’s something that you really have to experience to appreciate.

“You can tell people that the pens feel really nice, but everybody says their pens feel nice,” says Chris Cheung, formerly Autodesk’s product manager for SketchBook Pro and Pixlr, who now heads up Made With Mischief. “It really is [a case of] scribble and explore and see what you think. There are only a few categories of brushes, so it’s not like weeding through the thousands of permutations in other art tools. With Mischief, there is no learning curve.” For concept artists, an obvious potential use for Mischief is early in the ideation process. According to Cheung, one of the strengths of the software is that the power to zoom or pan the canvas without limit enables users to explore many ideas within a single file.

“A lot of time, artists say they didn’t know they wanted an infinite canvas until they had it,” he explains. “It allows the mind to wander. You can start off drawing an eyeball, and wind up with a whole character – then two people beside one another, and then a whole crowd.” 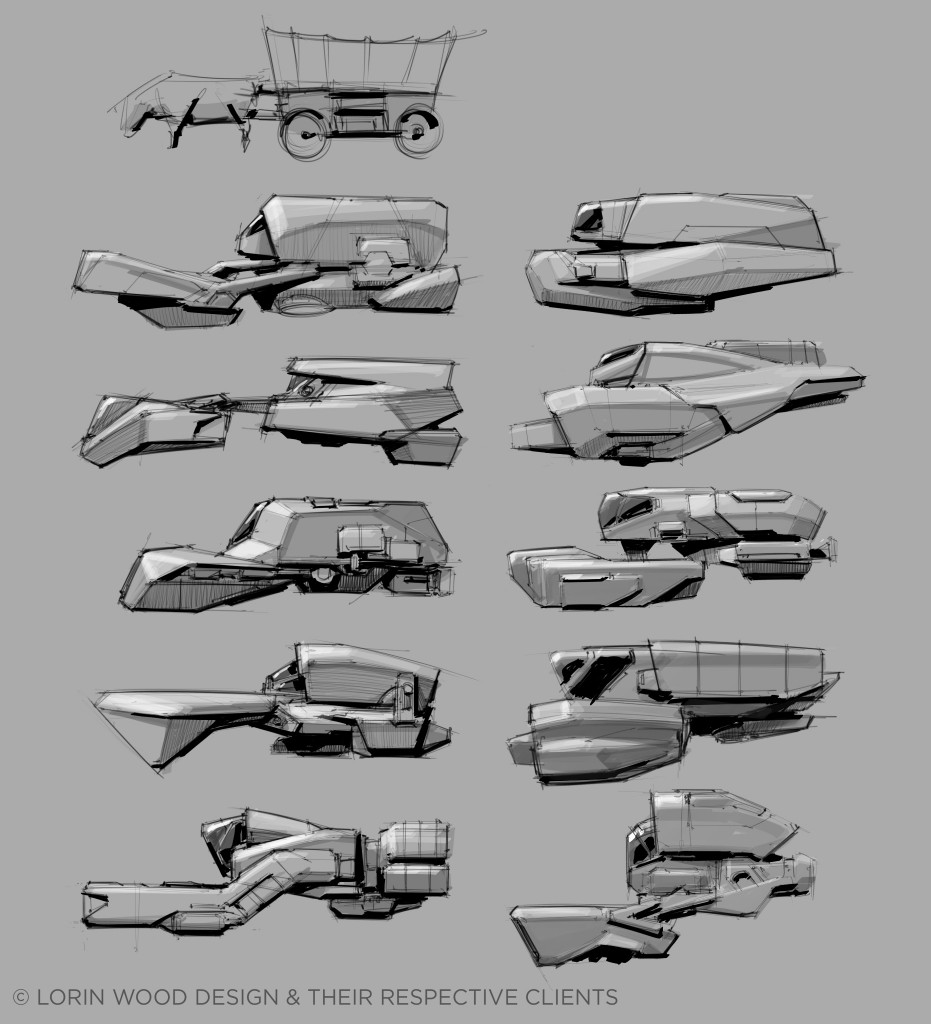 To help users navigate those long-distance mental journeys, Mischief 2.1 recently introduced the concept of ‘pins’: points of interest on the canvas to which the user can return with a single click.

“You can create hundreds of thumbnails or storyboard [frames] and pin your favourites as you go,” says Cheung. “Not only can you find each thought you created but you can reorder them to tell stories – the file is small, so you can send it off to a colleague or art director and have them open it up in the free version of Mischief – then export the ones you like as sketches. And because it’s a scalable format, even the tiniest thumbnail can be exported out at high resolution.”

That option to export sketches to refine in another application is crucial. Rather than being a replacement for existing tools like Photoshop, and all of the functionality that they contain, Cheung describes the software as “an ecosystem player”.

“It isn’t that Mischief is necessarily the end-all and be-all of art tools,” he says. “But it opens up different ways in which an artist can produce ideas, and a new way to share them.”

In fact, for many artists, one of Mischief’s great strengths is that it doesn’t contain all of the features of other graphics packages. By presenting you with a blank canvas, it encourages you to focus on what you want to create, not what the tools will allow you to do. As Cheung puts it, “You aren’t just [making art by] throwing a filter on an image.”

And given that Mischief is equally at home with doodles and hand-drawn text as it is with images, what you create may not be art at all – at least, not in the conventional sense. “For some people, Mischief is their de facto sketch tool,” says Cheung. “Others decide that it’s not their art tool, but their mind map. It becomes an artist’s thinking app.” A ship design created in Mischief by Gearbox Software’s Lorin Wood. A timelapse video of the process is available free on Gumroad, along with the Mischief scene file and a layered PSD.

It’s this open-endedness that makes Mischief such an interesting proposition – and one whose role in professional workflows is still being defined. Made With Mischief says that it is keen to discover what users of communities like ArtStation can create with the software so that it can expose its existing functionality more effectively.

“Right now, we’re looking to enable what Mischief already has,” says Cheung. “Since release, we’ve had over 80,000 downloads, but we have thousands and thousands more artists [to explore] the software before we have to do any drastic feature enhancements. I don’t think that Mischief is a tool that every artist needs to fall in love with, but it is definitely a tool that every artist needs to try.”

Special 25%* off Mischief for ArtStation artists

Visit the Made with Mischief store between now and midnight Friday 08/28/15 and use the coupon code: MISC4ART to receive 25% Off Mischief. Simply choose “Redeem a Coupon” from the checkout drop down menu, enter the code MISC4ART and hit the “Update Coupon” button to view the new discount price.

*25% discount available only on the Made with Mischief Store. Offer Ends Midnight Friday 28th August. For Mac & Windows.

Renowned artists James Paick, Ryan Dening, Shaddy Safadi and Wojtek Fus have all tried Mischief with amazing results. Visit their articles to see video tutorials and download the artwork they produced to view in your trial or full version of Mischief: