Think Tank Training Center and WarnerMedia Access Canada are pleased to announce the recipients of the Doers and Dreamers Digital Arts Scholarship award. With more than 100 quality applications submitted, the top 5 submissions will receive full-time tuition scholarships for the Think Tank Online 16-month Digital Asset Creation Program, starting on February 07, 2022. The scholarship competition was open to people of all genders, abilities and identities from underrepresented communities in Canada, including but not limited to members of Indigenous, Black and racialized groups, people with disabilities, LGBTQ2+ and Francophone minority communities.

We at Think Tank are so impressed with the talent of those who submitted their work to be considered; the application pool showed an overwhelming level of talent, creativity and a desire to further their skills. With so many qualified submissions, we felt that we should honour the amazing talent that we saw and have offered an additional 10 applicants a partial scholarship of 50% off Think Tank Online’s program fees.

The scholarships will advance the careers of these students in television, feature film, visual effects or video games through the opportunity to develop their digital art skills. They will develop marketable skills, benefit from mentorship opportunities, and gain unprecedented connections to industry knowledge from the Think Tank community and WarnerMedia Access Canada executives and creatives. To these applicants, the scholarship is more than just financial support, but a concrete sign that shows their vision for a future in digital arts is supported.

“I often think about stories, universes, and characters I create in animation format, as well as things I’ve gone through and ideas for moments in time. I wish I could make them from the ideas I come up with, because knowing how a story affects me when I think of it makes me wish I could share it with others in an approachable way.”

Alli has dreamed of making artwork for games since he was a little kid. At 12, he played a game called Tribes which had an online Building Mod, where he would use game assets to create new items, levels and monsters. Ever since then he developed a passion for making things with his hands. Whether it is using clay in the real world or using Blender and ZBrush to make little monsters based on doodles, it all fuels his passion for making art. Alli aspires to work in the field that gave him the passion that motivates him every day and advocate for transgender representation in the industry.

“My biggest hope is that I can create something that people will enjoy for generations. I want to see where my limits are, and release something to be enjoyed by people of all ages. I want to create these magical worlds, and give people an escape from their realities, who also feel as though they are limited by what this world has given them.”

Brittany’s heritage originated from the Anishinaabe people within the Ojibwe tribe. Since she was young, she spent her days looking up. She wanted to be able to create the worlds that she spent her youth devouring. She dreamt about a career in Video Games and Film but it seemed unattainable back then, just a hope. Some of her favorite memories are from when she imagined what it would feel like to be an employee working on the games she loved, such as being a set designer for Harry Potter. Building on her diploma in game design from Fanshawe College, Brittany wanted to join Think Tank to continue to upskill her abilities to create the biggest and best 3D environments. As a member of the LGBTQIA+ community, she identifies as someone on the asexuality spectrum. 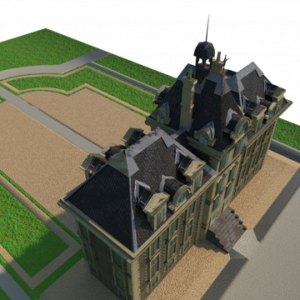 “There is nothing more satisfying than watching what has been in your head for so long and working so hard on it coming to life and enjoying it. That is the goal I have set for myself – to bring the stories and characters out to the world and create adventures, mysteries, and excitement.”

Growing up as a black immigrant, Fatima would spend hours watching her favorite shows, and by the end of it she would be so fascinated by the stories that were created and how they came from someone’s imagination. Nowadays, she still enjoys seeing how stories come to life in different mediums, inspired by stories that on the surface could be the same and yet are approached differently. She now has carved a little corner on the internet where she shares life comics and mystery/action stories that she created. These stories not only talk about the struggles of being a minority but also take place in a world that is very different from ours. Her goal is to learn and keep creating things that she enjoys creating so that she can be proud of herself, and be happy to share them with the world. 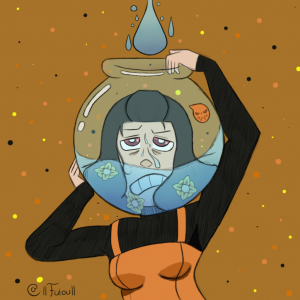 Drowning in a Small Space by Fatima

“I used to be someone whose fears dictated what I could and could not do in life. Learning and collaborating with ambitious women has helped me learn that every kind of struggle is within our control to be overcome. The ability to make the audience genuinely feel seen is my reason for creating art. I believe that we’re one idea away or one character away from changing our own reality for the better. I have my passion and my dreams to push me to continue to empower women and other underrepresented minorities by creating opportunities to champion their voices.”

Aubrey learned about diligence and ambition from her parents who worked multiple minimum wage jobs to support her and her siblings after immigrating to Canada in 2005. Her parents worked hard to support her potential in art. Turning imaginative worlds and characters into reality is a form of superpower and it has given Aubrey comfort and joy since she started drawing with crayons at 6. She has wanted to create art for video games since she was a child; however, growing up and seeing the difficulties women faced in a male-dominated industry, she hesitated to pursue it as a career. That was until she started working with women who have broken glass ceilings in the tech industry in organizations such as STEM clubs and LadyHacks, the first all-female Hackathon in Ontario. Their stories have proved that there is space for people like Aubrey in any industry. She was interested in the scholarship because she came upon Think Tank’s student showcase on The Rookies’ website and it showed her the talent that came out of the school and the subsequent successes of the alumni. Building on her background in traditional art and computer science, she hopes to join Think Tank Online and empower other women as well to pursue a career in the arts by blazing her own trail. 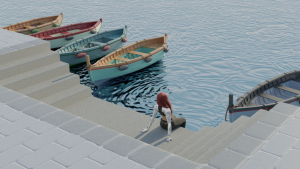 “I think I have come far from the small town in Mexico, where I could only dream of working in the video game and film industry. I want to be an inspiration for underrepresented communities, especially the ones that I’m part of, latin and LGBT people, as well as represent Canada, this beautiful country that has welcomed me and my family with open arms.”

Alejandro grew up with a deep fascination with games and realistic gaming environments down to each grass and grain, but the living situation for his family in Mexico was hard at that time, so he could only dream of working in the video games industry. Since he was a teenager he would read the credits every time he finished a video game and would get excited every time he saw a latin name because he feels like one day that could be him. Being a gay man, he always appreciated female characters that were empowering and feminine at the same time. He’s also inspired by little details, for example, an ant that uses a drop of water and a leaf as a telescope in A Bug’s Life; these are small but extraordinary things that bring the character’s personality to life. Those little details are what he would like to bring to his own characters and worlds. 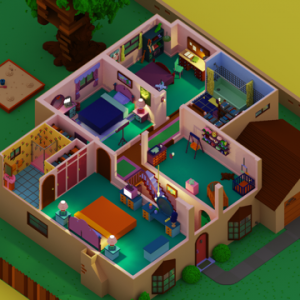 Alejandro recreates the home from The Simpsons

Founded in 2005, Think Tank Training Centre specializes in training dreamers and doers in the latest software, techniques and technologies that cater to the needs of the film, television and video game industries. Think Tank Training Centre was born out of a passion for sharing the industry knowledge with the next generation. Ranked in the top three best creative and entertainment schools in the world by the prestigious Rookies online community in 2021, Think Tank fosters a tight-knit community where everyone is embraced like family. With massive support for their students within and beyond the programs, Think Tank continues to provide students with the ability to establish rewarding careers in the entertainment industry.

Established in 2020, WarnerMedia Access Canada elevates, activates, and connects Canadian talent from communities that have been historically marginalized with global opportunities and global audiences. This suite of above- and below-the-line initiatives builds on WarnerMedia’s relationships with creators, craftspeople and technicians of all genders and abilities from communities including Indigenous, Black and racialized groups, people with disabilities, and members of LGBTQ2+ and Francophone minority communities.

WarnerMedia Access Canada values the undervalued and celebrates the underrepresented – all to bring the best and most promising talent in Canada to the world.

WarnerMedia believes in authentic, meaningful connection – to each other, to culture, and to their consumers. They empower fearless storytellers who bring our world into focus – and create cultural touchstones with the power to draw us together. Through best-in-class talent development programs, mentorship, placement opportunities and industry exposure, WarnerMedia Access serves as a powerful conduit connecting under-represented Talent to their content and brands.