In the Game Environment art category of the Beyond Human Challenge, participants were given the choice to build on the concepts from Phase 1 or design their own and create a 3D environment for a game rendered in a real-time engine within the theme, depicting the future of humanity.

Browse entries from the Game Environment category of the Beyond Human Challenge. 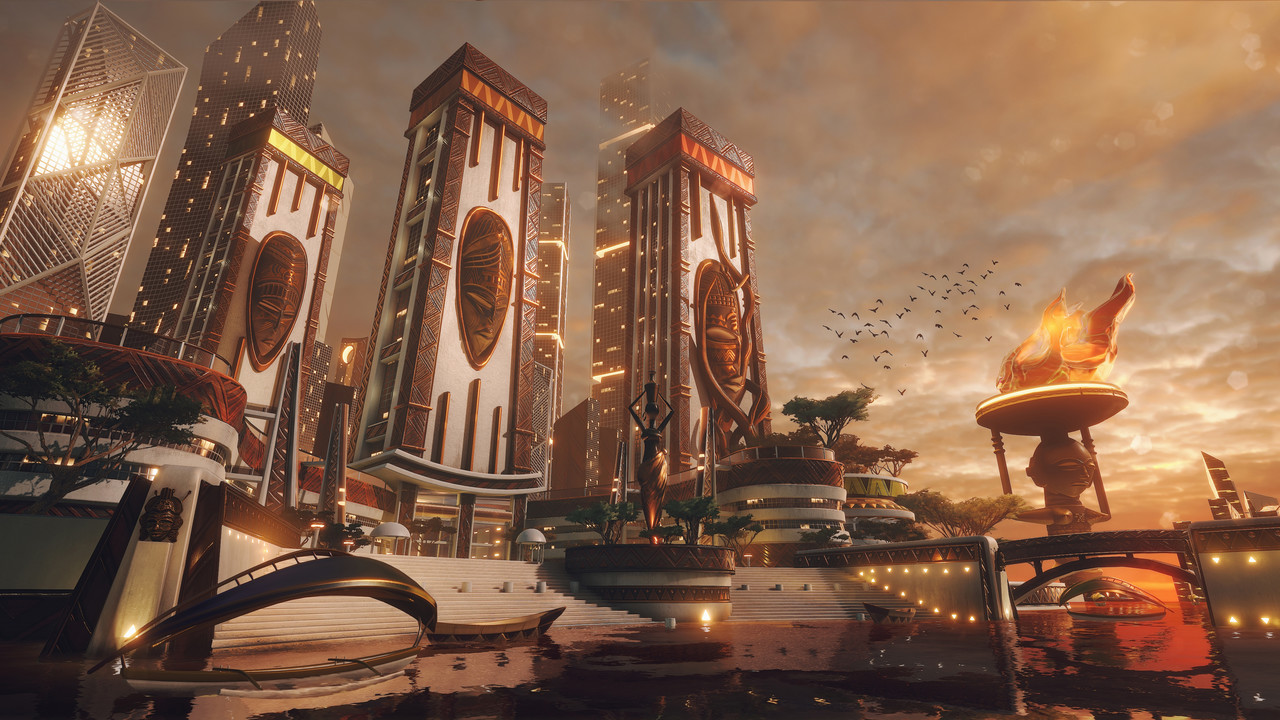 How did you interpret the theme and how did this reflect in the scene you created?

Maarten:  When I first saw the post about new challenge I was very excited! My first thought was China (or Asia) taking over the world with their strong economy. Buying Europe, parts of Africa and the Americas within 150 years. I have to say I was influenced by the cover art of the announcement of the challenge.

Luckily some concept artists made some awesome metropolitan concept arts! I love third person narrative games and when I built this environment I always had that in the back of my mind. How would a protagonist walk through this world? What would they see? Hear? What would they interact with? Where would they go to? I am really interested in storytelling and I wanted this world to feel lived in and ready to be explored.

Jeryce: I asked myself what can the next step of African subsharan civilization be in the future without forgetting the fundamental things that made Africa culture unique, with a little fantasy of course. It’s the first time that I make something that my family can relate to, something that can talk to them about and it was a hell of a motivation for a Challenge.  I had this idea of a peaceful, beautiful and powerful futuristic city. I tried to reflect this with the warming color of the sunset that you see a lot when you imagine a landscape in Africa. I wanted the viewer to feel amazed by the enormous and clean structures, to be inspired by the culture sign like the Mask and the Adinkra symbols on it which have a different meaning related to the mantra of the city. From left to right the symbols means Change, Determination, and God. I thought about a linear third-person action/adventure game, like Tomb Raider or Uncharted discovering the city by boat and then travel to the jungle to search an ancient artifact and fight against poachers on the way.

Chris: My initial idea for the environment was a future where mankind successfully managed to fuse organic material with metal. Creating these electric trees that would soak up the pollution that mankind created and output everything into electricity.
I think the art-style of the environment I created would be best suited for some kind of indie crafting building game that would allow players to re-purpose pollution smog into valuable electricity. I wanted to create art that would be simple that focused mostly on colors and shapes. 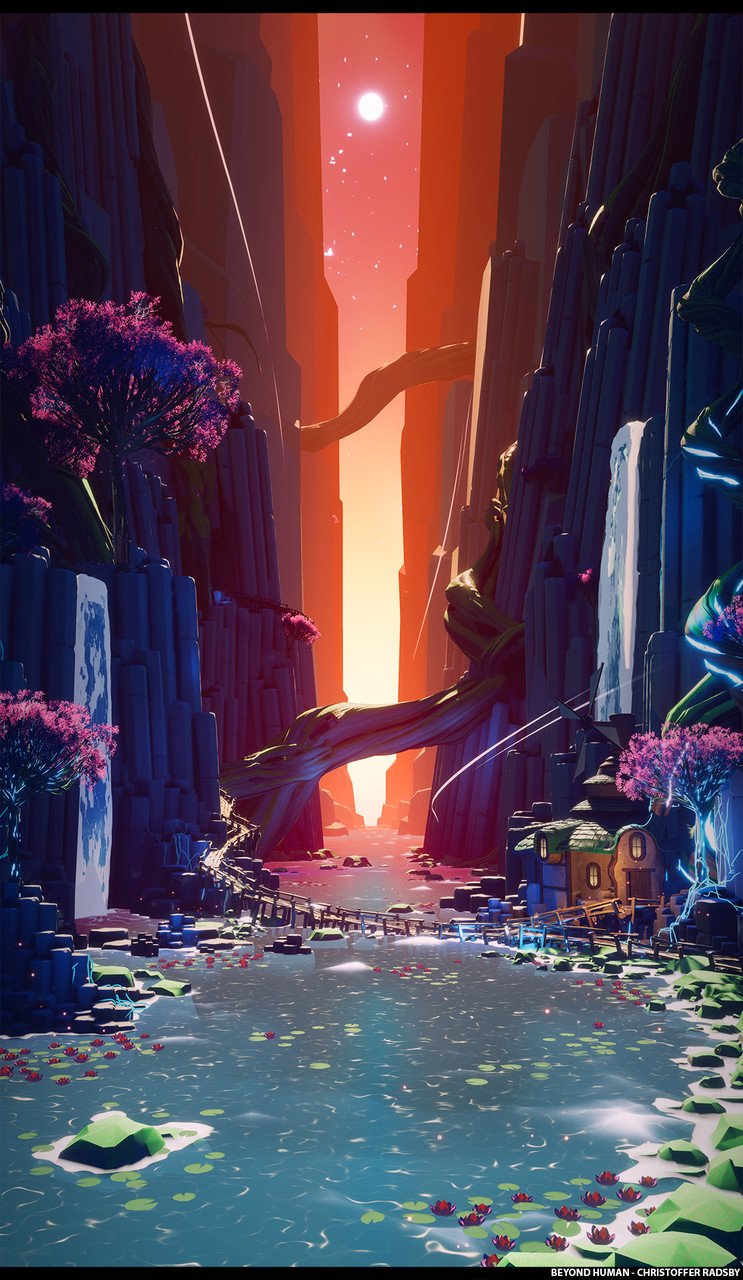 Maarten:  Before I decided to participate in the challenge I made a promise to myself that I had to finish with a decent entry. In order to make sure I would finish I planned my tasks quite carefully. My first priority was to get my block-out right so I could prioritize what needed to be done for a “shippable” entry. Hero props were on top of my list since these were very prominent in the scene. Besides that I wanted to make sure early on that I could reach the visual bar I had set for myself. I made a benchmark neon light (very important in this environment) and a benchmark hero prop (the ATM). I also made sure to get some lights in as soon as possible to get a feel of the atmosphere.

After that I started working on the trash and other smaller props. I also looked at where I could “cheat”. The pipes and dark metal area’s all have the same metal texture with a very quick UV map. The far buildings in the back don’t even have a decent uv map with a “building texture” because it is not visible in the final pictures or video. Saving time, performance and actually finishing was a great learning experience. Things like a video and a decent breakdown were only possible because I had time left. I can’t wait to participate in future challenges as a returning challenger!

Jeryce: As a first timer, the first thing that I had in mind was “originality” and trying to touch people’s heart by putting mine into the process.  I had to make something that we don’t see a lot, so my strategy was to create my own scene from scratch.  The fact that I’m participating in a 3D Challenge was also good opportunity to show and explain one of the things that I love the most in my life and I always wanted to do an environment based on my origins.

Chris: I mostly entered this challenge for my own sake, I wanted to simplify my art-style so I can could evolve my core art skills. I think I also wanted to show that you can get far in a challenge like this without actually spending all that much time on detailing individual assets or use the latest rendering techniques. My main strategy for the challenge was to make good use of colors and composition. I also went for a vertical main shot, which isn’t all that common in game-art. It’s something we see often on magazine covers, movie posters and is very powerful if used right I think. 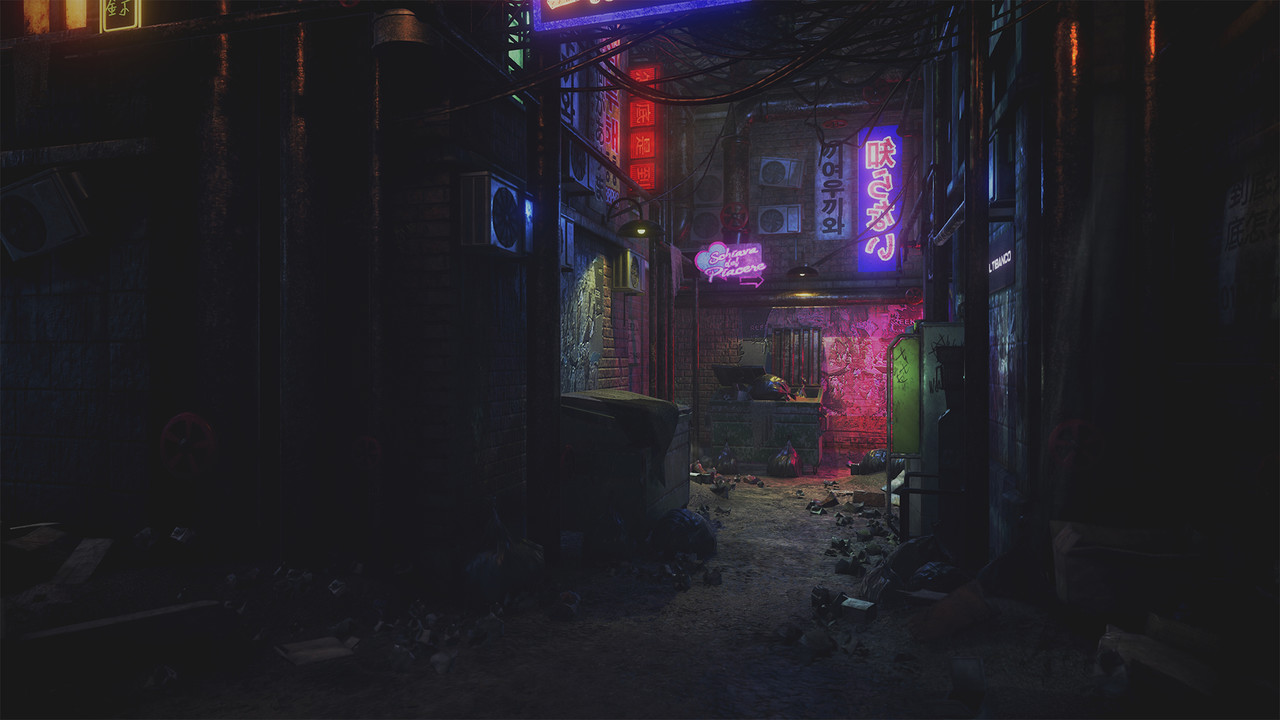 Maarten: Yes there were! Quite a few actually. As I worked on my own submission I also checked the other submissions to see how they were doing almost every day. I followed Jeryce’s submission closely because he had a very unique theme, in my opinion, and I was very curious to see where he would take it. Also the submission of Marika seemed really interesting to me because she did the same concept art as I did, it was really cool to see how we interpreted the concept art slightly different.

Besides that I tried to help other artists with providing feedback and solving problems I ran into myself.

Jeryce: Yes of course, I was following a good friend of mine, Robin Lhebrard, in the 2D category and in the Game Environment category, Ben Keeling and Marika Speck.

Chris: I was following quite a few, but the ones that impressed me the most were the ones that had their own unique designs. It takes a lot of skill to make a good design by yourself. I was following the 2nd Winner of the challenge Jeryce – amazing work with very clear and interesting art. Marcel Schanz had an interesting take on the whole thing, very alien-like and cool idea.
Paul Mandegarian had something interesting going on as well. His compositions reminded me a lot about Paul Pepera’s latest work. 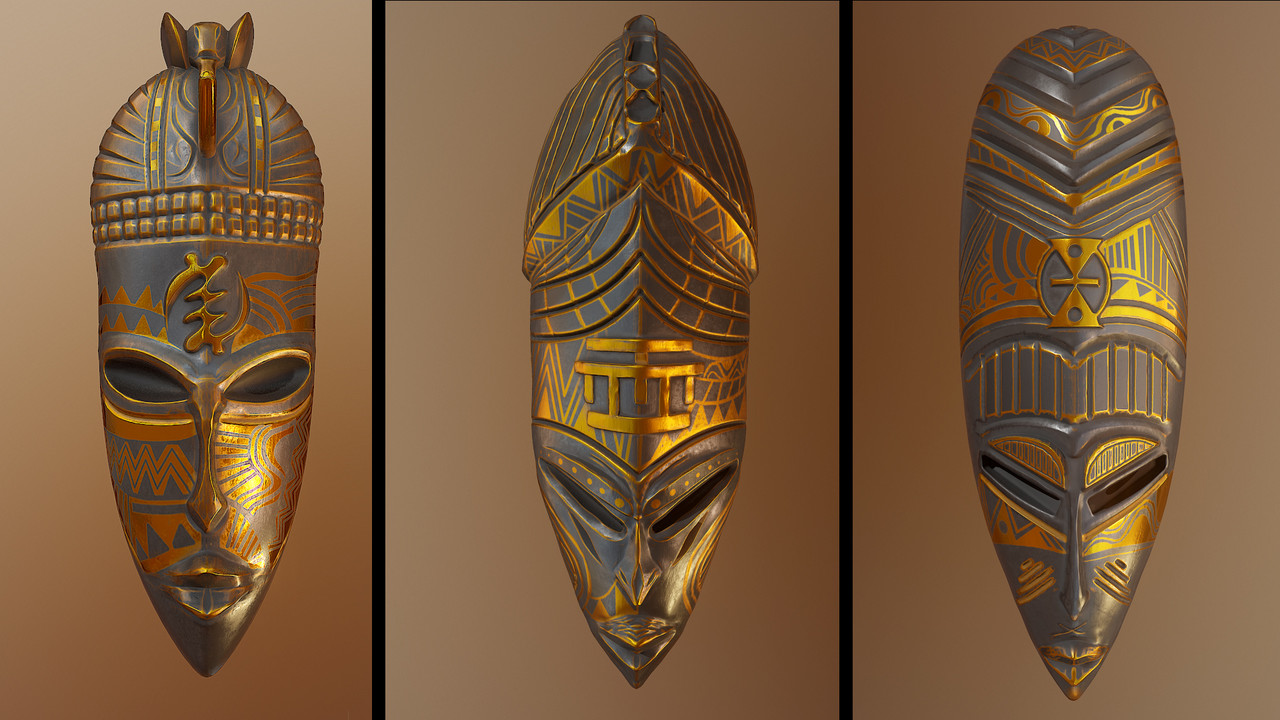 What do you think is the most difficult part about the game environment challenge?

Maarten:  I chose this concept art from Helio Frazao to challenge and practice my lighting skills. This was definitely a hard part since color and values aren’t my strengths. Also giving it a personal touch was a puzzle. I played around with dead body bags, lighting, different people etc. In the end I just added more space where I could add a little story with my own touch.

Jeryce: Creating my own scene and trying to keep it simple was the most difficult part of this challenge for me. I had to focus on the essential and to cut some features or parts of the environment because of the time.

Chris: I think the most difficult thing for most people taking part of the challenge is to estimate if a concept is viable for production. I think 90% of all the concepts done from the previous phase were not viable for 3d-game-art production at all, which is something that you must keep in mind when taking on a challenge like this. The second hardest thing would probably be to design your own environment as it takes a lot of work and it really tests your core-art skills. People who followed the concept to a tee I feel like sometimes they can be constrained by whatever the concept artist created but other times I feel like it would be more interesting if people did their own interpretation of the concept art and took it beyond the initial concept. 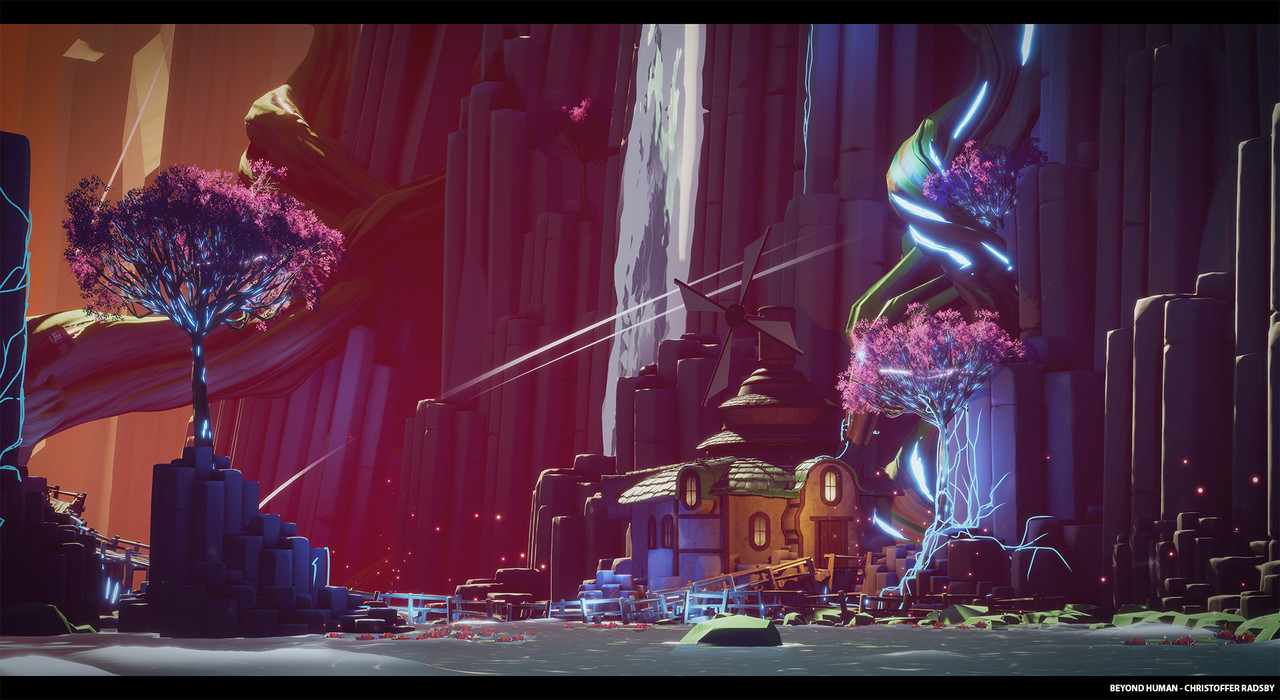 Maarten: Plan ahead! Look for a concept art that you think is manageable for you, with the given time of the challenge. I have seen a lot of cool concept arts, but a lot were not doable for me in the given time. Make sure you don’t keep iterating and never stop! At some point you have to stop and move on with other parts of the environment or just call it done and apply the lessons you learned to another environment.

Also help others, give feedback, do overpaints etc. You’ll be surprised how much you learn yourself by giving feedback and how rewarding it is when someone else actually listens to your feedback. Most of all have fun with it! I could see my environment getting more and more detailed every day, that’s is just so exciting!

Jeryce: Don’t be afraid to participate! You will learn a lot about yourself. Don’t be shy to create your own scene or add some modifications to an artwork from another category to show your creative mind.

Chris: I think it’s valuable to spend a little bit more time thinking about what compositions are powerful before even starting. It doesn’t matter how awesome and detailed your art is when the composition and colors are off. A strong foundation is necessary for good art in my opinion. This doesn’t mean that you have to be the most skilled artist out there, I’m certainly not. But if you start with a powerful composition, that grabs peoples attention from the moment they see it, even in a super rough state then you’re off to a good start. 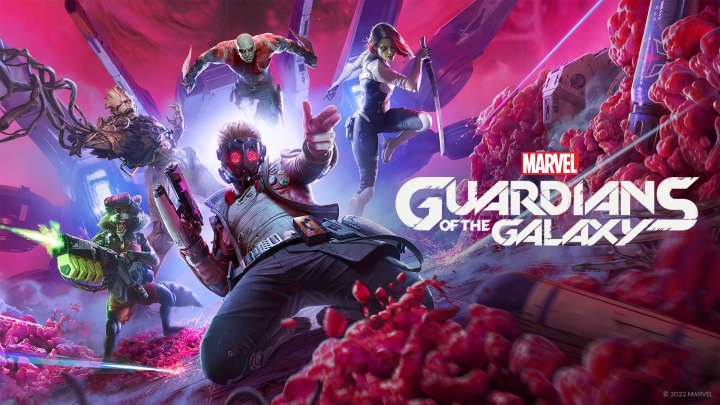 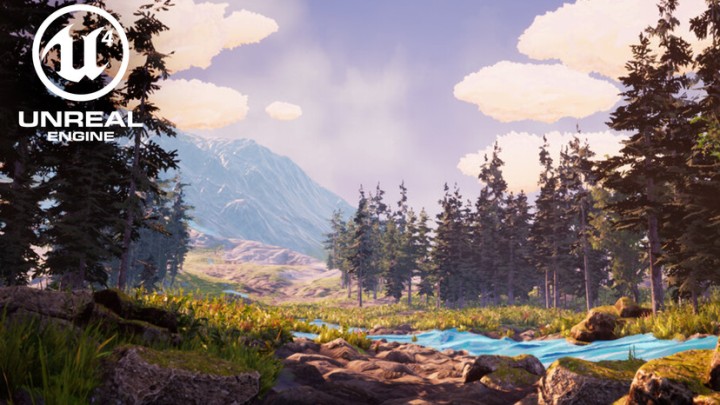 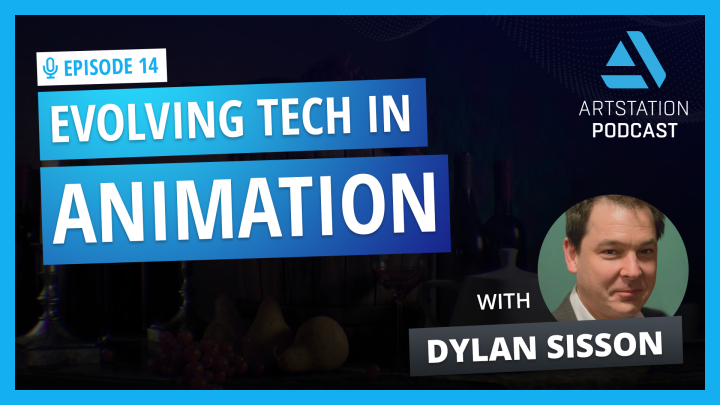