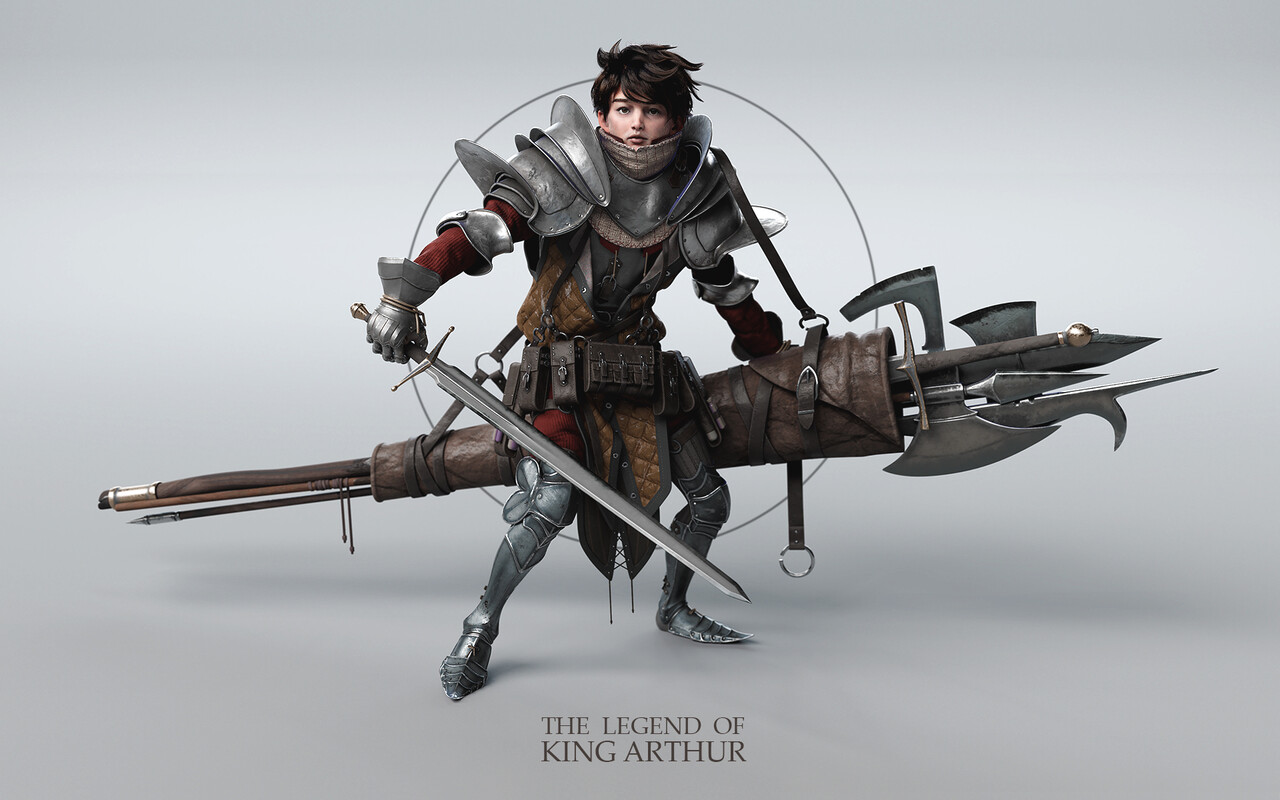 ArtStation Community Challenges are opportunities for artists to work on their skills, connect with the community, get noticed and create an awesome piece for their portfolio.

The participants of the Film / VFX Character category of the Legend of King Arthur challenge had to create one fully rendered character based on the historical references. Like in previous Production Challenges, the artists were given the option of choosing a concept from the first phase or creating their own.

Browse all Film/VFX Character entries from the Legend of King Arthur Challenge.

In this interview, the winners Nils Wadensten, Arthur Siraev and Georg Uebler give insight into their process and strategy for creating their stunning masterpieces. 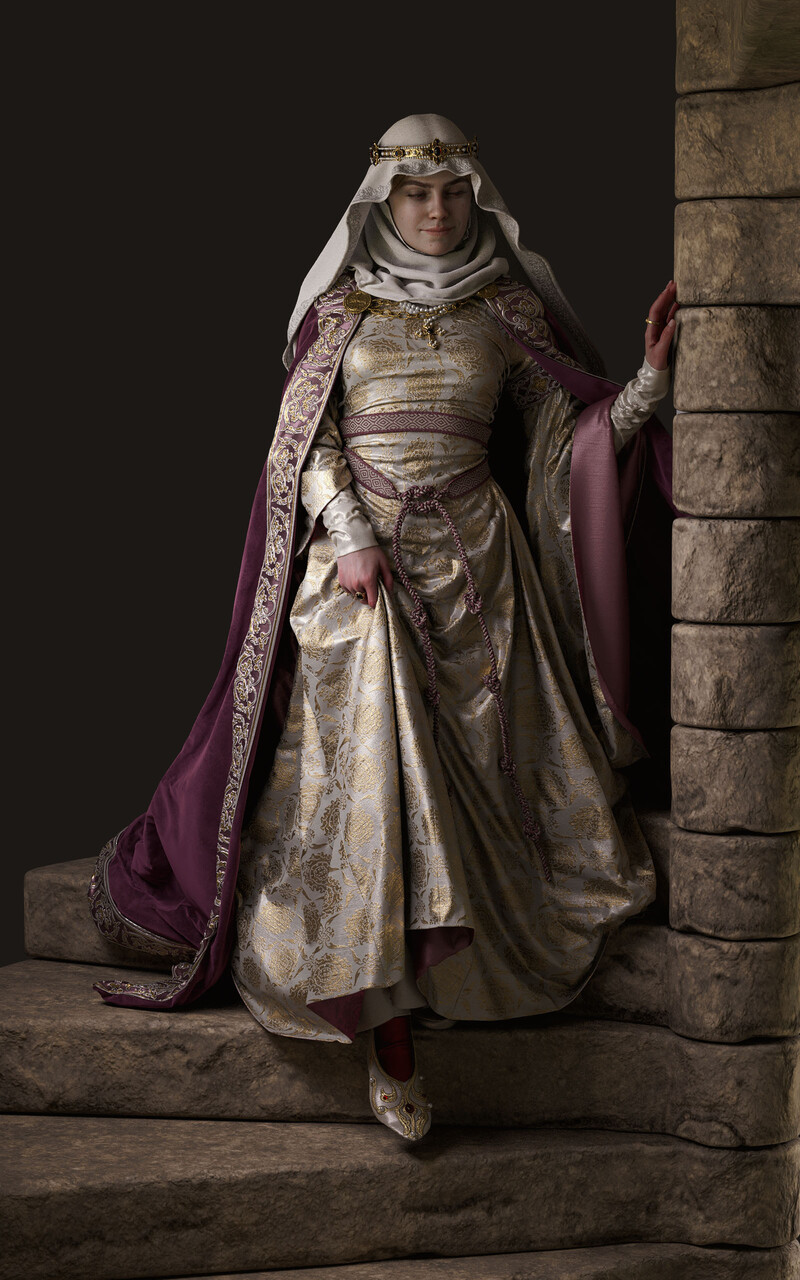 Tell us about the concept for your character.

Nils: I knew I wanted to create a character that felt believable with a strong foundation in history. I had several ideas that I liked for this challenge. Some of the alternatives I considered were King Arthur, the Lady of the Lake and even a Saxon Warlord who might have been Arthur’s adversary. My initial thoughts were to portray a character as their real-world inspiration might have looked. That would have meant going for a late Roman era appearance.

In the end, I instead settled for the more typical Medieval era as this is the time period that the Arthurian legend is most strongly associated with. I chose to go with Guinevere as it would allow me to work with a lot of beautiful clothing and fabrics. I was strongly influenced by the Pre-Raphaelite artists of the 19th century and their romantic vision of the Middle Ages in the kind of mood and feeling I wanted to create.

Arthur: I had long planned to create a knight for my portfolio so I did not hesitate to take part in the competition. My idea for the competition was to create King Arthur at the age where he was on his way to becoming a man. To show him as a child, but already with great fortitude and courage. At first, I wanted to do everything according to my own concept, but it would take a long time and I might not have the time.

It took a couple of evenings to find the concept  from the Character Design category and I found exactly what I had planned. It was a stunning concept by Ana Fedina. This concept has many details and a variety of materials, such as fabric, leather, metal. It was a good opportunity to gain a lot of experience and do a very interesting job.

Georg: Choosing the concept for my character was not easy. I knew from experience that I wouldn’t go for my own concept as I would normally do with private work. This would eat up too much unnecessary time with weak-minded decisions. The concept had to reach certain criteria though. It should have elements in it that would force me to learn and try out new workflows and techniques. Also, it should be visually appealing and interesting to make sure that I could spend a lot of personal time on it without having regrets for choosing it. 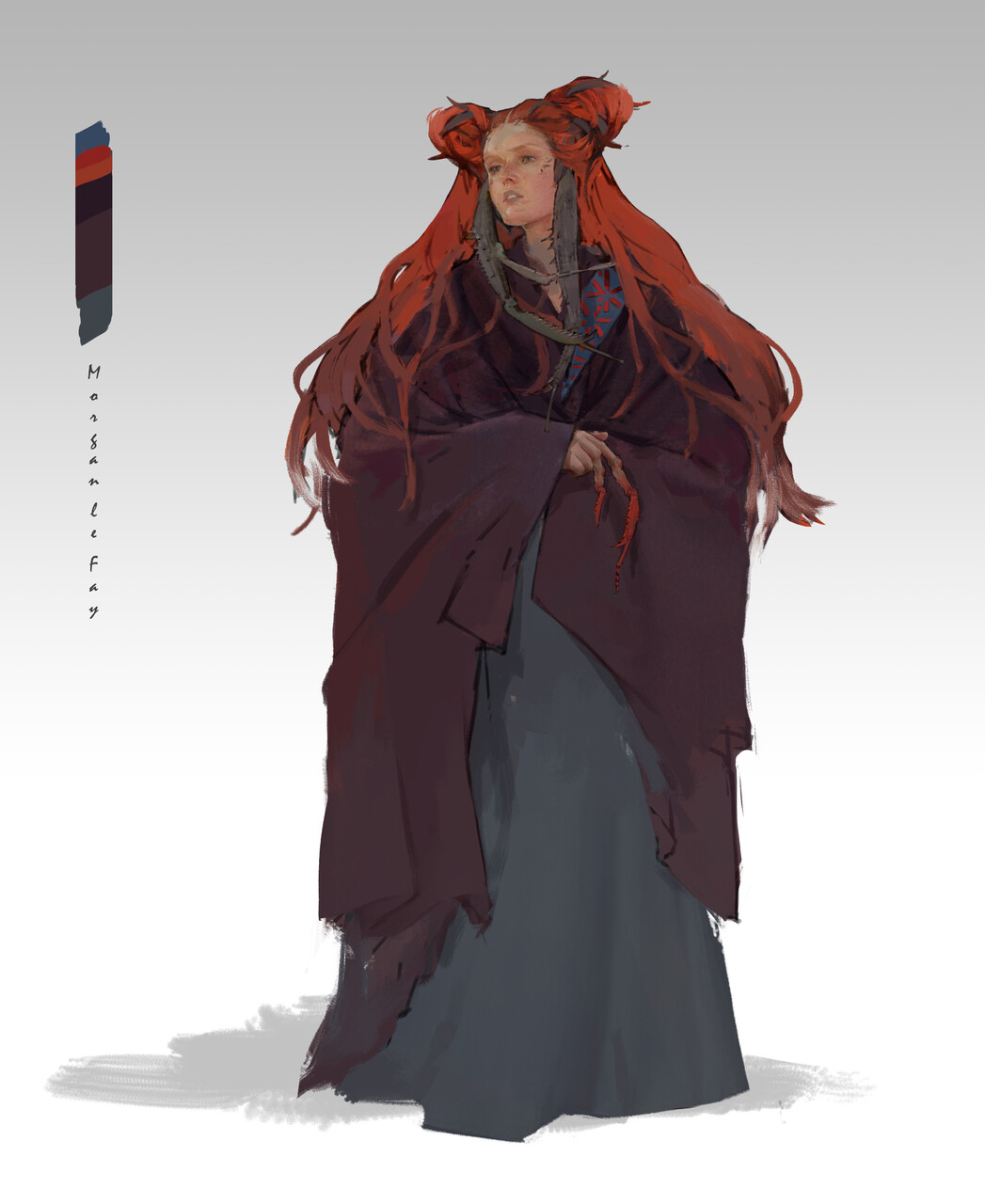 I spent about two days collecting a bunch of great concepts whilst trying to figure out which one would fit my requirements and also if I could do it justice in 3D. After a lot of considerations, I settled on one of the concepts of Morgan Le Fay by Lola Zhang. The mood from the subtle pose, the painterly feeling and also the hidden meanings she put into the character really caught my eye. Also, it felt quite unique and different compared to other concepts, which I thought would let my piece stand out. In the end, it turned out to be the right decision. 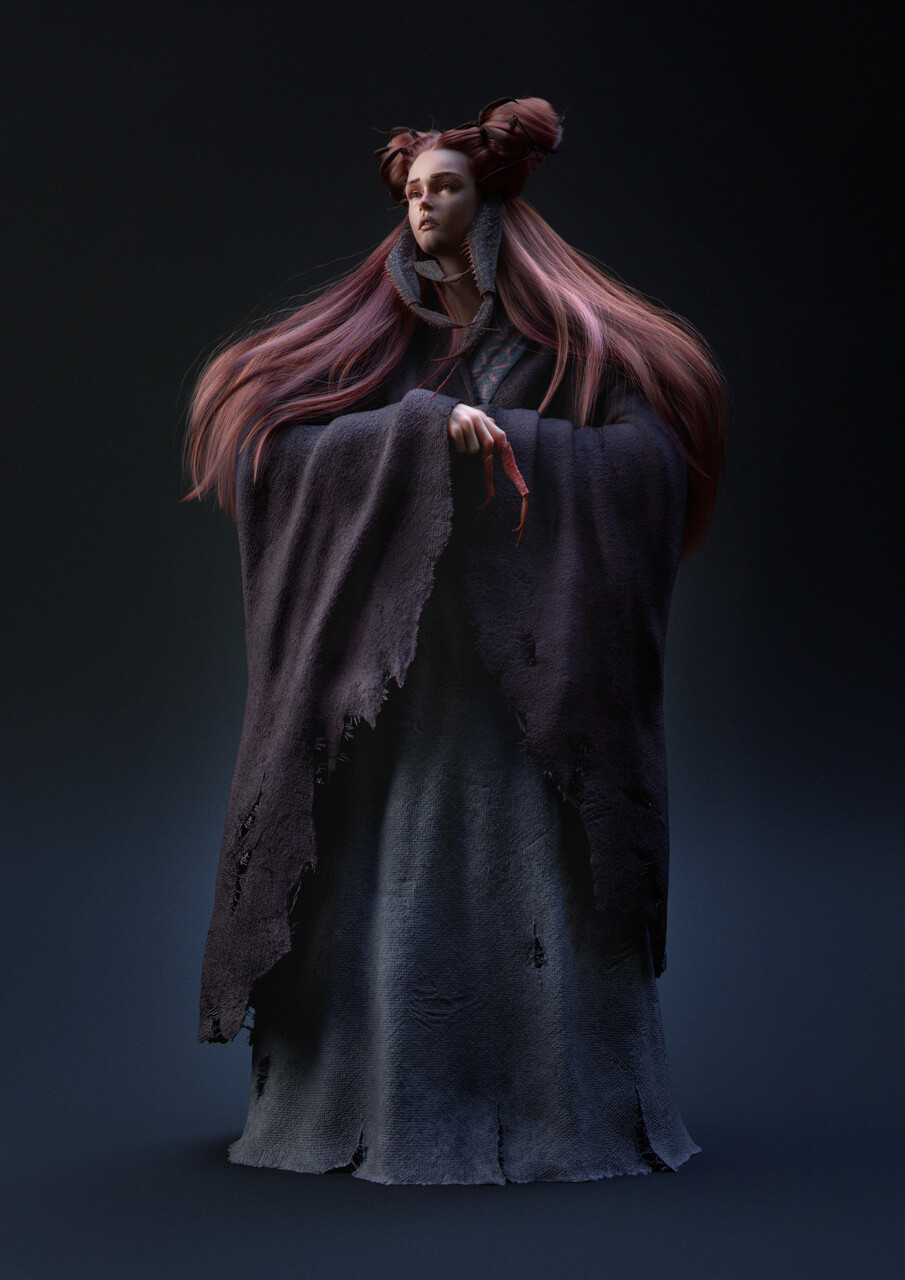 Nils: I joined the challenge very late with only 10 days or so left until the deadline. I didn’t have much time for trial and error. Therefore, I chose a subject and a workflow that I felt comfortable with and confident I could pull off in a limited time. It allowed me to focus on things like posing, rendering, and presentation rather than solving a lot of technical problems or really time-consuming modeling and sculpting. I love Marvelous Designer for this purpose, as it allows me to get a good and believable result in a short amount of time. I remember the days when you had to manually sculpt clothing like that, one fold at a time!

The first thing I did after I decided to join was to set up a time plan, where I planned out a “delivery” for each day. This way, I could clearly see if I was on track time-wise or whether I needed to revise my plans. I made sure to free up at least 8 hours a day that I could spend working on the project.

Arthur: My strategy was to allocate the right time and use proven methods to create a character. I know my strengths and weaknesses and it helped to make a plan. It was also necessary to take into account the workload of the main work. Two weeks I spent on low-field, two weeks on detail in high-poly, a week on texturing, a week on sewing, light and render. The last week I used to fix what I didn’t like. I had to remodel and texture some things.

Georg: The first part of my strategy was choosing the right concept. Even though I wanted to learn something new along with the project, I also knew what I was capable of and how long I might need for certain parts of the chosen concept. Since I am still at the start of my learning curve, I had to plan ahead for unexpected problems to appear and additional time for learning new skills and workflows required for the project.

What really helped me was writing down my tasks every day to give me a visual guide which relieved my mind of any chaos. I also tried not to work too long at one part at a time and always switch to a different task. This way I could see which areas would take more time than others and have a fresh view every time I come back to a previous part. 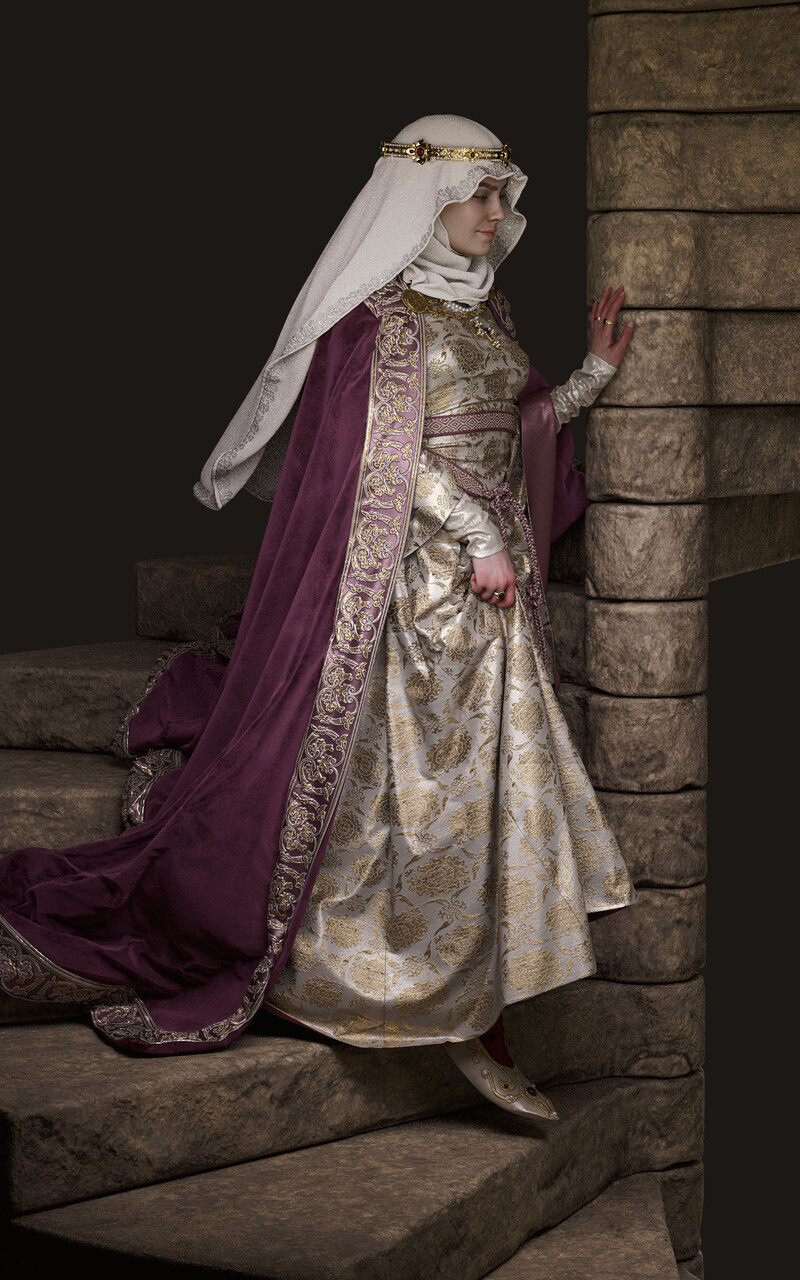 What part of the challenge did you struggle with the most?

Nils: For me, the most challenging aspect was to stick to my time plan in order to finish on time. I had to be disciplined and not get bogged down in details. More concretely, I did struggle with the circlet that she wears to get a look that I liked. So I actually had to redo it once because I didn’t like the first one I made.

Arthur: I spent a lot of time blocking out a beautiful concept for my character.  It was difficult to do something with little or no experience before. For example – hair. I had to review a lot of lessons in a short time, reread articles and try to do it. I also put the lighting for a long time and set up the render.

Georg: I think everybody who is working in 3D knows the struggle of constantly facing new technical problems, especially if you are relatively new to the game. I stopped counting how often I had to restart a certain software or tried to find workarounds for countless bugs.

My biggest struggle was trying not to get caught up in details and focus on the whole piece at once. This gets easier with experience. But sometimes, I did get completely lost in something probably no one noticed in the end. This habit consumed way too much time and I almost paid for it. For everyone who is struggling with this, I can recommend to look into the 80/20 rule which helped me a lot. 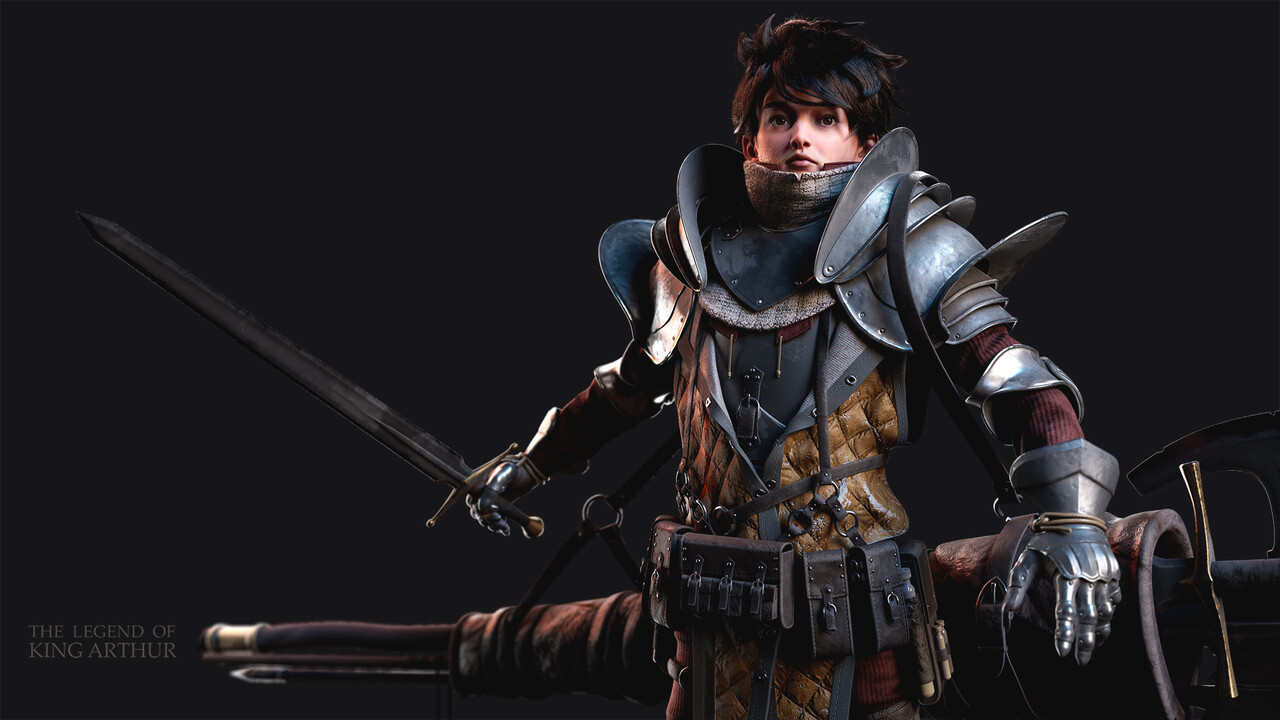 Nils: This will be very generic advice that you’ve probably heard many times before but they bear repeating. Even if I am a poor example of this, don’t wait too long to get started. Cutting it close like I did will create unnecessary pressure. Make a time plan and try to be conservative with estimates. Things usually take longer than you think they will. Don’t procrastinate but also don’t work too hard. You might need some sleep from time to time!

If your goal is to do as well as possible in the challenge, I would also say: Play to your strengths! Maybe don’t try something you’ve never done before. Instead, try to do what you do well, but even better! On the other hand, you can treat the challenge as a fun opportunity to learn something new and improve your skills in a different area. In that case, you can completely ignore my last advice.

Arthur: The main thing is to start doing and not to be afraid of difficulties. The big plus of the contests is that you can follow the participants, ask the right questions to the contestants and get help from them. Plan your time. Do what you like and enjoy it.

Georg: My advice would be to see the challenge as a challenge. Don’t be afraid of trying to win even if the competition is strong. You will see how much ambition can push you to new levels and will motivate you through rough times. 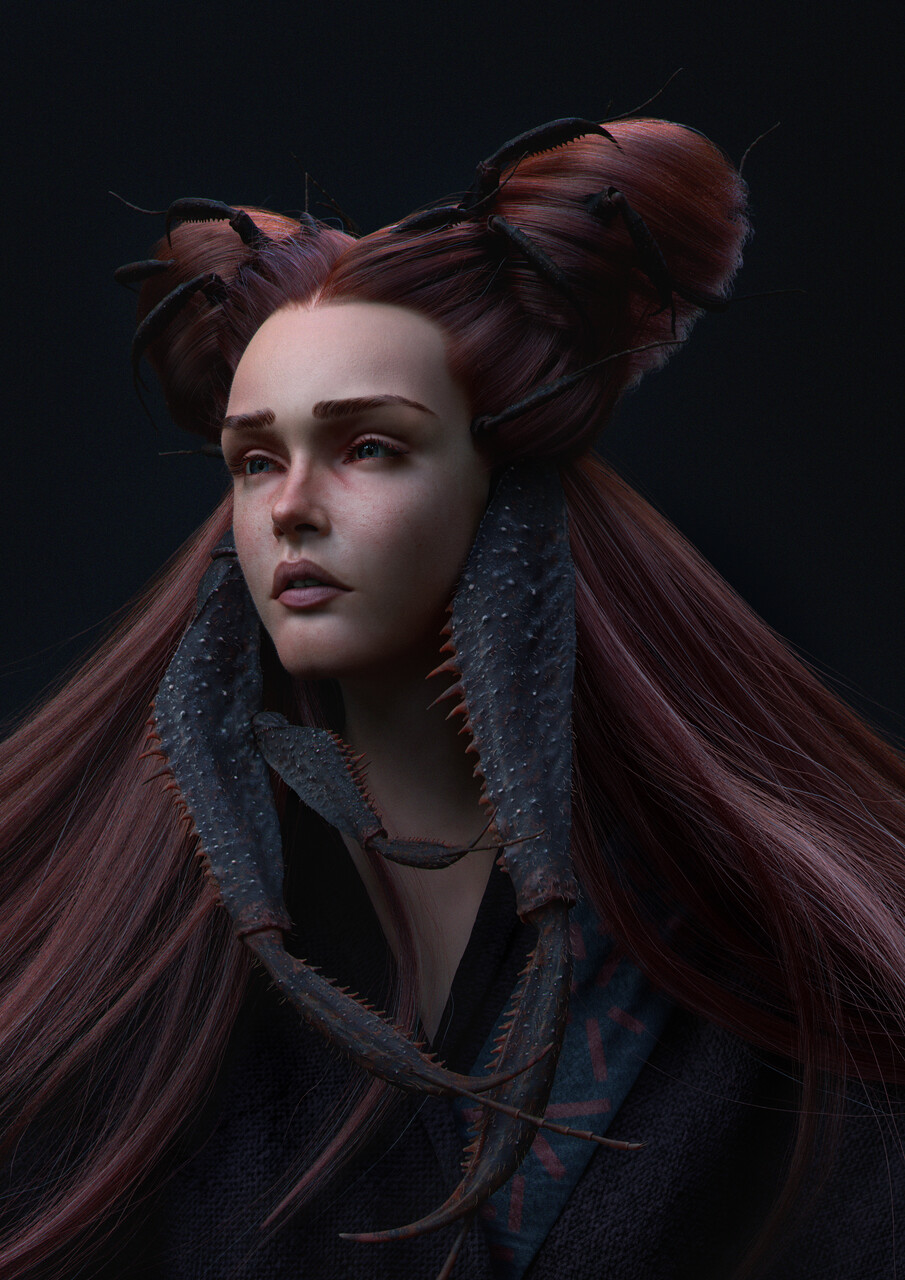 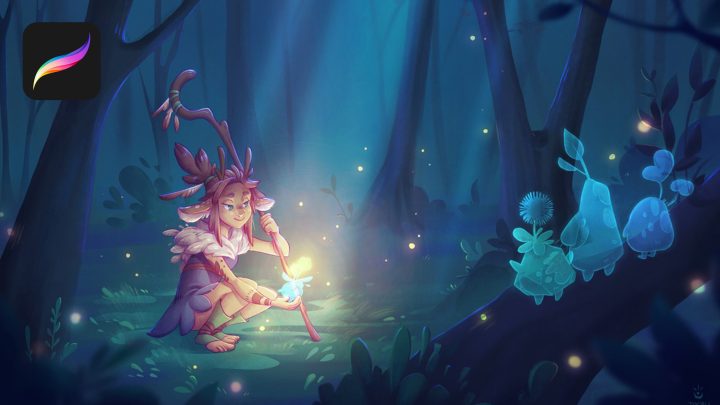 Illuminating a 2D Illustration in Procreate with Julia Körner